We will go for a walk in the forest with ourselves 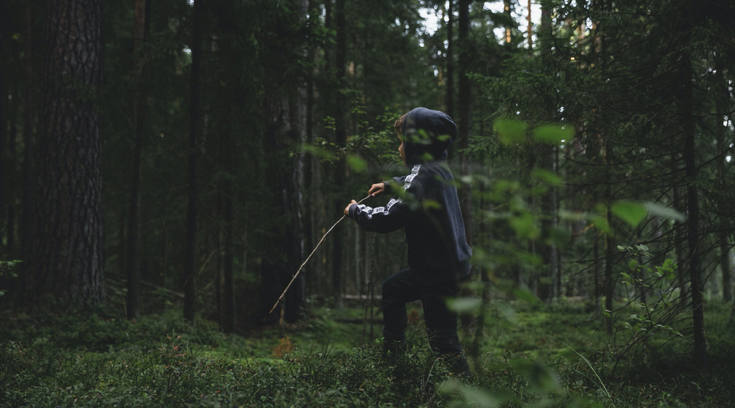 Audio performance-walk in the forest for one spectator

Author of the idea and director - Fedor Elyutin

Authors of the text: Maria Kirsanova, Sonya Grigoriadi, Fedor Elyutin, with the participation of the staff of the Museum of New Analogies

Teaser can be watched at the link

"We will go for a walk in the forest with ourselves" - audio performance-walk, to which the author of the idea and the director Fedor Elyutin sends the spectator alone. 5 spectators come to the session at the same time. Each of them receives headphones and a player, and from that moment, for each, their individual journey begins.

The scenery - a real forest, with a meadow and moss.

The props - an apple and a felt-tip pen in your pocket.

Headphones on the head. In the headphones – a voice of an 8-year-old boy Fedor (or a girl Asya, the performance exists in two versions, male and female).

For 36 minutes, this child's voice becomes your guide and interlocutor.

It offers to be friends, confides secrets to you, shares fears, fools around, talks about his/her life and sincerely asks about yours. It asks for honest answers and gives tasks, thus making the performance interactive.

The performance is site-specific, but without a particular route. You yourself choose your path in the forest, and not only.

Dipping into the performance, you recollect your childhood, reflect on your real self.

"We will go for a walk in the forest with ourselves" (a line from a poem by A. Vvedensky) is the first performance that the impresario created himself, and did not bring from Europe.

This is a rare opportunity to find out what is in his soul.

The premiere of the performance took place on August 8th, 2020 in Suzdal at the "Man of the World" laboratory. Then the work was included in the programmes of the festivals "Archstoyanie" (Nikola-Lenivets), "Territory" (Peredelkino) and others.

Fedor Elyutin is a representative of the impresario profession, which is quite rare today. He is a member of the Union of Theatre Workers of the Russian Federation. He is the founder of an independent theatre and production company "Impresario", which has been looking around the world for masterpieces of experimental theatre and bringing them to Moscow since 2014.

The company has presented many names to the Russian audience, including the creation of the Russian versions of the most popular performances of the German company Rimini Protokoll (Remote Moscow, Cargo Moscow, Uncanny Valley). Fedor is also the author of the book "Remote Moscow. How to make money on impressions" by the publishing house "Alpina Publisher", 2019.

"Until now, I have been a guide between the Russian theatrical environment and foreign experience - I have been travelling around the world, trying various theatrical experiences, choosing what I wanted to share with my audience in Moscow.

I have always understood that all these production tricks are a cover, a way. By nature, I'm a dreamer, an artist who wants to create and share worlds.

And then everything worked out: the world slowed down, everything habitual disappeared, new meanings appeared. During the quarantine, I spent a lot of time in the forests and acutely felt the connection with these centuries-old giant trees. My 35th birthday was approaching - some kind of a milestone.

Against the background of all this, I heard inside myself a talk of a little boy, in fact myself in childhood, who was talking to me, but the one who is now. He talked about himself, asked what I have become, what childhood dreams I have fulfilled. If I saved myself as a child when I grew up.

It was important for me personally, but very soon I realised that this is a universal story that can work out with many.

With this performance, I want to push people to meet themselves." Fedor Elyutin

Teaser can be watched at the link