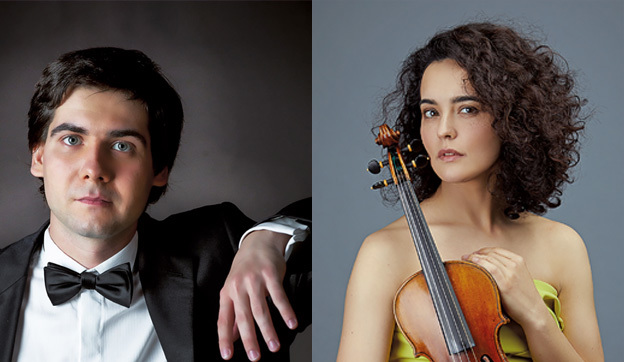 Schubert. Rondo for violin and piano in B minor, Op. 70

Respighi. Sonata for violin and piano in B minor

Vadym Kholodenko has a reputation as one of the most musically dynamic and technically gifted pianists. Laureate of numerous prestigious awards, including the International Schubert Competition in Dortmund, Sendai Piano Competition, Cliburn Competition in Fort Worth.

Alena Baeva is one of the most prominent and versatile soloists of the world music scene.

She has performed in many prestigious concert halls with leading orchestras in Russia and other countries under the direction of N. Marriner, P. Berglund, V. Gergiev, V. Spivakov, S. Oramo, etc. Among her partners in chamber performances are Yuri Bashmet, E. Virsaladze, K. Skanavi, I. Golan, V. Kholodenko.

She has made a number of recordings on radio and television in Europe, Israel, Japan, Portugal, Russia and the USA.

Schubert. Rondo for violin and piano in B minor, Op. 70

Respighi. Sonata for violin and piano in B minor