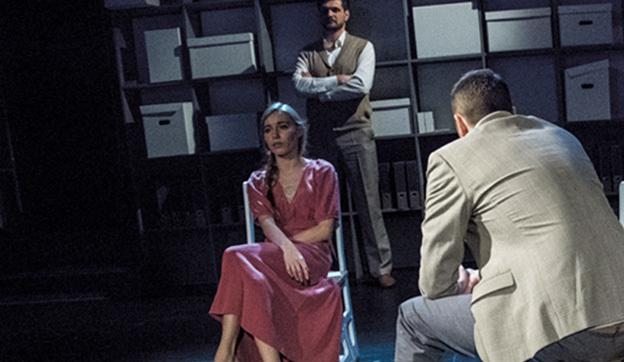 Other dates and times
Nikitinsky Theatre

The performance was included in the Long List of the "Golden Mask" Award - the list of the most prominent performances of the 2019/20 season.

Recently, the theatre has been more and more actively exploring the bordering space of cinematography: it's not even about video projection, which only a few productions can do without today, but about the emergence of a special direction - stage versions of famous, classic, good old tapes.

Theatre "Man" tried to recreate on its small stage a special world of a film script, which was once launched into production but was never filmed. "The Wharf" is the first major work of Gennady Shpalikov (1937 - 1974), a man, who along with Tarkovsky and Shukshin, "defined the artistic face of Russian cinematography in the second half of the 20th century".

The director Danil Chashchin: "Our "Wharf" is a kind of a memory, an attempt to restore an unrecorded movie, to shoot it "just in the head". This text cannot be perceived separately from the personality of Shpalikov, the artist who in many ways created that tangible spirit of the "thaw period" on the screen, and later, following the director of the unfinished film Vladimir Kitaysky, chose to voluntarily quit this life, being still quite a young man. It was important for us to try to convey this mood of "doomed happiness" and confusion: to live, in general, is good, but it is not clear how to live. The thaw is followed by new frosts, and the mirage that you see is about to dissipate. All you can do is remember, infix it. "The Wharf" is an impressionistic sketch, an attempt to capture the light and bright day of today, which will become a "yesterday" tomorrow".