The Knight of the Burning Pestle 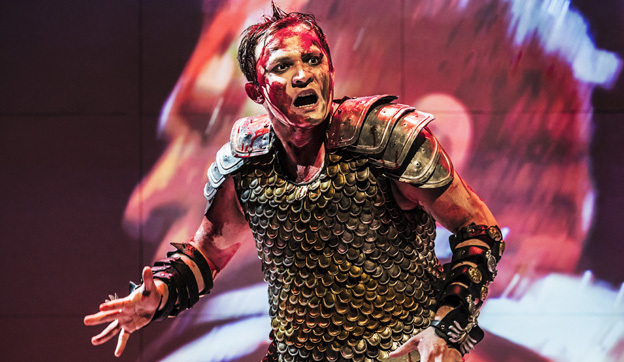 Sometimes the viewer's love for the theatre goes beyond all boundaries. During "The London Merchant", a thoughtful and boring performance, a couple of spectators suddenly appear on stage. They have some tips for "improving" the play: the setting should be more exotic, the knight should perform feats, and also the songs and dances should be added ... The restless couple offers their nephew Ralph, an amateur artist, for the main role. Ralph climbs onto the stage, and so "The London Merchant" becomes the "Knight of the Burning Pestle."

Declan Donnellan's performances have already been presented at the Platonov Festival – "The Tempest" in 2011 and "The Winter's Tale" in 2017, based on plays by Shakespeare. This time the director turns to the comedy of Shakespeare's contemporary, the English playwright Francis Beaumont. The play, first staged in 1607, breaks down the fourth wall - the wall between actors and spectators. The performance raises questions of the relationship between art and the crowd, the quality of art itself, information manipulations in the modern society, the boundaries of what is permissible.

After the release in Paris in 2019 and premiere in Moscow, the performance was successfully held in London, Madrid, Toulouse and Gdansk.

"A theatrical hit appeared in Moscow ... The director built everything, it seems, by millimeters, when the transition from one style to another does not slow down the action, when the rhythm is not broken, the breath of the general performance is not disturbed ... Where the wildly funny turns into the scary, which in its turn somehow organically returns to comedic positions."

"The magic of good drama and clever direction ..."The Knight of the Burning Pestle"at the Pushkin Theatre is the "theatre of a healthy person" who is ready to laugh in a good way at himself and at modern theatre."

"Clever, ironic and at the same time incredibly funny performance."