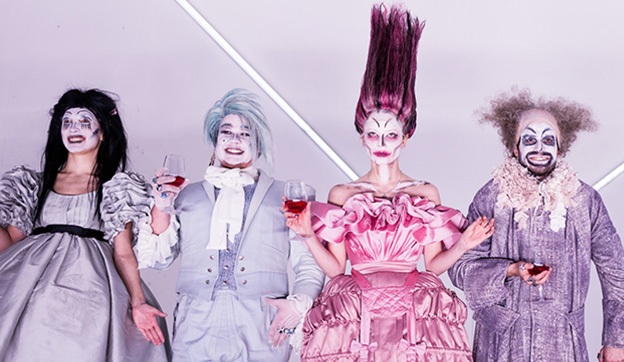 Duration - 2 hours 30 minutes with one intermission.

Moliere's "Tartuffe, or The Impostor" was written in the 17th century, but the leitmotifs of the play - bigotry, hypocrisy and irresponsibility - have always been characteristic of humanity to one degree or another.

The play, which premiered on January 30, 2020, reinterprets the tradition of French farce. Farce is manifested in everything here. Muravitsky's directorial decisions bring punk-rock aesthetics to the classic play by Moliere, suggesting that you first laugh at yourself, and only then think about the eternal.

Yuri Muravitsky, the director: "I would like to rehabilitate comedy, which is considered to be a “low” genre. Laughter, just like tears, has a purifying effect. Gives you the opportunity to look at yourself from the outside. Our performance plays with the aesthetics of the areal theatre and its carnival-farcical nature."

The production involves a new generation of the Taganka Theatre troupe, which has absorbed the skills and traditions of different acting schools. The scenography and costumes for the performance were created by the theatre designer Galya Solodovnikova. A French composer Louis Lebe worked on the musical accompaniment.

"Youth, hooliganism and theatrical brilliance - these are the properties of the new Taganka performance, which asks to be in the posters of European festivals."

A new performance based on Moliere's Tartuffe is a bold step for the Taganka Theatre. One of the first productions in Russia based on this play appeared on the Taganka stage in 1968, directed by Yuri Lyubimov. More than half a century has passed since then.

Irina Apeksimova, director of the Taganka Theatre: "Our new "Tartuffe" can be called the path from Yuri to Yuri. Each era has its own Tartuffe. Moliere's "Tartuffe", born in the 17th century, oddly enough, today is becoming more and more topical and relevant story every day. Lyubimov's production has been going on in our theatre for more than half a century, has stepped over into its 52nd season and breaks records for such a long life of the performance. The secret of the performance's success is that Yuri Petrovich brought Moliere's characters as close as possible to today's audience. But Tartuffe is such a character who endlessly changes his guises, the very nature of hypocrisy has changed, the forms that it takes today. Therefore, the behavioral strategies that Tartuffe, Orgon and his members of the household are using are now completely different."

Duration - 2 hours 30 minutes with one intermission.