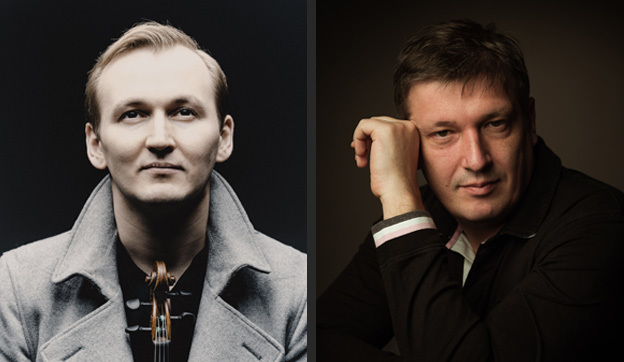 The concert will replace the duo Amihai Grosz and Kim Sunwook.

Edvard Grieg - Sonata No. 3 for violin and piano, c-moll;

He graduated from the Moscow State Conservatory (class of Eliso Virsaladze), took private lessons from Alexander Satz. In 1988, at the age of 19, he made his debut at London Wigmore Hall, in 1990 he was awarded a gold medal at the International Tchaikovsky Competition in Moscow.

He gives recitals in London, Paris, Rome, Zurich, Munich, Salzburg, Amsterdam, Montreal, Vienna, Bern, Budapest, Prague and Tokyo; performs at the Berlin Philharmonic, the Théâtre des Champs Elysees, the Paris Philharmonic, the Palais des Beaux-Arts in Brussels and the Vienna Konzerthaus. In 2006 he received the title of "Best Instrumentalist of the Year" from the "BBC Music Magazine".

Nikita Borisoglebsky is one of the brightest Russian violinists of the younger generation.

Graduated from the Moscow State Conservatory and postgraduate course (class of Professor Eduard Grach and Associate Professor Tatiana Berkul'), then continued his studies under the guidance of Augustin Dumais in Brussels and Anna Chumachenco in Kronberg.

He is a laureate of many international music competitions and was given a number of prestigious awards from various foundations and the Government of Russia: Violinist of the Year by the Maya Plisetskaya and Rodion Shchedrin International Foundation (USA, 2009), Virtuoso Prize of the Italian Academy of String Instruments and the Antonio Stradivari Society (Cremona, 2011), the Jean Sibelius Medal from the Jean Sibelius Foundation (Helsinki, 2011).

In 2018, the musician was awarded the honorary title "Honored Artist of Russia".

Nikita Borisoglebsky plays the unique violin made by the Italian master Matteo Goffriller in the 1720s.

Edvard Grieg - Sonata No. 3 for violin and piano, c-moll;