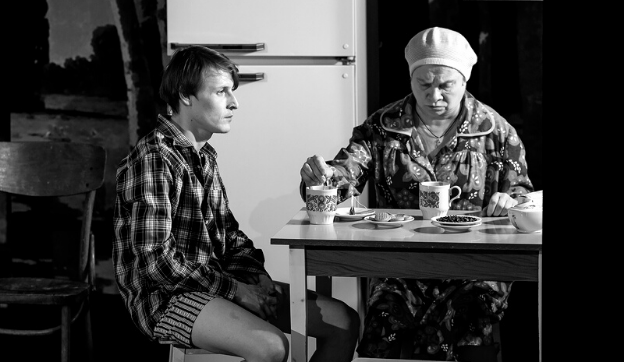 Duration - 1 hour 50 minutes with one intermission.

Performance by Mikhail Bychkov, the artistic director of the Chamber Theatre and Platonov Festival, laureate of the International Award named after K.S. Stanislavsky and multiple nominee for the Golden Mask award, exists simultaneously in two planes – theatre and cinema. In a close-up in front of the public there appears an eccentric, but so native Russian life, the confusions of a little man and his naive dreams of happiness.

Balzaminov’s marriage, written in 1861, is unusually relatable to our age. Thanks to the special expressive means of the performance, a spectator will be able to see today's people with their current dreams and problems in Ostrovsky's characters.

The actors Mikhail Gostev (Balzaminov) and Tamara Tsyganova (Krasavina) became laureates of the "Bravo!" theatre award for playing parts in this performance.

"Balzaminov fits in today as well as in yesterday, for the sleepy dreamlike state which the Russian soul and mind (if any) have been in for decades has enduring power over the Russian people since the very historical and mythological moment when Emelya was laying on the stove, and the pike was bringing him whatever he wanted. And Balzaminov is no fool, he just paranoidly mistakes the wish for reality. Because he is Russian!"

Marina Dmitrevskaya, the editor-in-chief of the Petersburg Theatre Journal

Duration - 1 hour 50 minutes with one intermission.