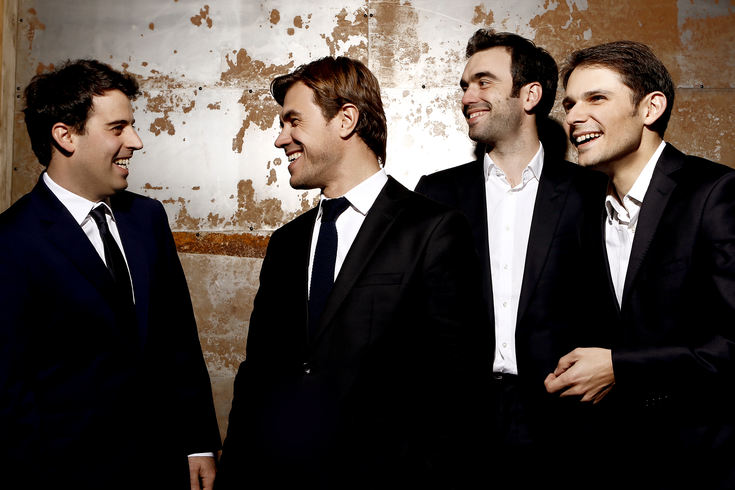 With the support of the French Institute in Russia.

The Modigliani Quartet is a French string quartet founded in Paris in 2003 by four graduates of the Paris Conservatory.

This is one of the most respected string quartets in Europe, it regularly performs at the best concert venues in Paris, London, New York, Washington, Amsterdam, Vienna, Berlin, Barcelona and other cities, and also takes part infamous music festivals in Salzburg, Lucerne, Rheingau, Schwarzenberg, Gstaad, Nantes and other prestigious music forums.

Since 2008, the quartet has released four albums that have received prestigious awards and recognition by musicians and critics in many countries.

Since 2014, the quartet has carried out the artistic management of the Rencontres musicales d'Évian festival. After a 13-year pause, this festival, created in 1976 and celebrated by the former art director Mstislav Rostropovich, began a new life with the efforts of the Evian resort and Modigliani quartet.

The quartet performed at such famous venues as the Wigmore Hall in London, the Auditorium of the Louvre Museum in Paris, the Pierre Boulez Hall in Berlin, the Prince Regent Theater in Munich and others. In 2017, the Modigliani Quartet became the first string quartet to perform at the Hamburg Elbe Philharmonic.

Amaury Coeytaux — on the violin by Giovanni Battista Guadagnini 1773,

Loïc Rio — on a violin by Alessandro Galliano in 1734,

Laurent Marfaing — on the viola of the work of Luigi Mariani 1660,

Francois Kiffe — on the cello by Matteo Goffriller in 1706.

With the support of the French Institute in Russia.