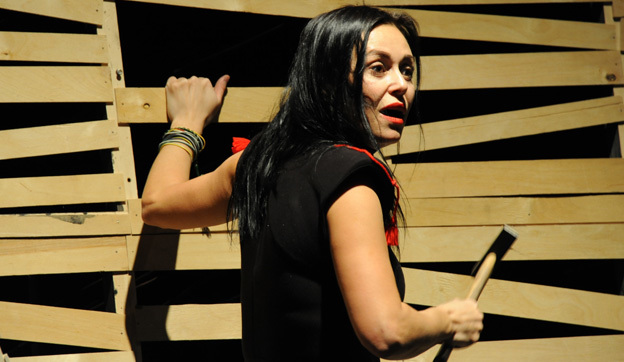 Together with the project "Festival "Golden Mask" in Voronezh".

The performance is in the Tatar language with simultaneous translation.

The play is based on real events, a story about one of the Moscow shops, the owner of which kept her employees who came to work from Central Asia in the position of slaves. There are only two heroines in this story: the tormentor and her victim, one is an inverted reflection and the continuation of the other. The performance is abstracted from everyday details and is rather a parable, a tragedy leading to purification.

Director Eduard Shakhov: "When one person opposes himself to humanity, to humanism, when he admits the idea that everything is allowed to him — he is superman, he is above others, he has the right to violence. He gave himself this right, the indulgence in violence, justifying it with any lofty goals, ideas of messianism. All this, ultimately, leads to the collapse of the individual, the degradation of man, the loss of humanity".

"Shop" is a psychological drama, first of all, about the nature of slavery, about the renunciation of freedom, about how genuinely tenacious totalitarianism is, about a crooked world in which a semblance of justice is accomplished through a new crime".
Blog of the St. Petersburg Theatre Journal

Together with the project "Festival "Golden Mask" in Voronezh".

The performance is in the Tatar language with simultaneous translation.