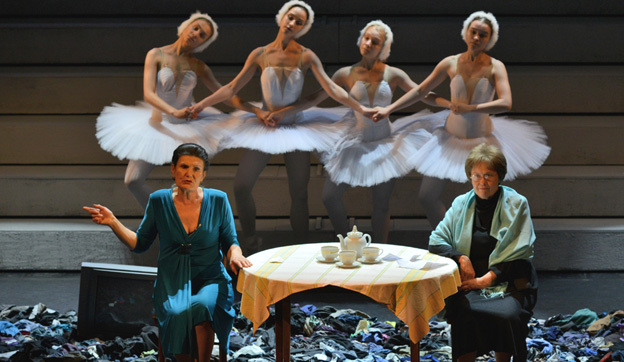 Voices of the age of changes

Together with the project "Festival" Golden Mask "in Voronezh".

Laureate of the Golden Mask Award in the nomination for Best Actress in a Supporting Role (Valeria Prokop).

The documentary story of Svetlana Aleksievich, a Nobel laureate in literature, is dedicated to the controversial event of Russian history — the collapse of the USSR. The focus is on the fate of an ordinary person. For 70 years, the country lived with a certain development vector — and suddenly everything changed. But the man remained.

The book contains stories of people with different positions: those who were faithful to the idea of ​​communism, and those who were waiting and seeking change. The performance is not intended to take sides — it is an honest conversation with everyone, regardless of belief. Who is a Soviet man? What did he consist of, what are his paradoxes and contradictions? What happened to him while that modern Russia in which we live now was born?

"The director skillfully creates an atmosphere of collective meditation, during which everyone in the auditorium, unwittingly, plunges into the comprehension of their relationship with the past".
Julia Kleiman, theatre critic

Together with the project "Festival" Golden Mask "in Voronezh".