Michel Sima (real name Michał Smajewski) primarily considered himself a sculptor, photography was more a hobby than a profession for him. Yet it was photography that brought him international recognition. In the course of 10 years he portrayed artist friends such as Pablo Picasso, Henri Matisse, Francis Picabia, Ossip Zadkine, Alberto Giacometti, Jean Cocteau, Man Ray, Marcel Duchamp, André Derain, Le Corbusier, Marc Chagall, Joan Miró, and many others. He was also indebted to this friendship with artists for his assumed name. The idea for his pseudonym was an anagram first suggested by Paul Éluard: SIMA is AMIS (friends) spelt backwards.

The artist and his oeuvre was the theme that most fascinated Michel Sima as photographer. In all his images Sima pictured artists at work in their studios. But this was not purely a record of various stages of the artistic process. His amicable relations with the subjects and the trust that prevailed in every location enabled him to produce unique images that show subtle nuances of each character’s personality, and to convey an unrepeatable creative aura.

Jean Cocteau wrote in his preface to Michel Sima’s ‘21 Visages d’Artistes’, the photo album dedicated to the legendary École de Paris and published in 1959: ‘My dear Sima, you had the commendable idea of capturing the faces of artists as if in flight — the excited faces of artists in combat with the monsters they themselves engendered, the riders of the Apocalypse that drive us into a labyrinth where we are seized by the wild, ambiguous desire to at least see the Minotaur, if not actually encounter it.’

In the context of the Platonov Festival, this exhibition project acquires a new meaning - this is another facet of the Platonic era. All the heroes of Shem are contemporaries of Andrei Platonov, as well as he who worked in the first half of the 20th century.

Michał Smajewski was born into a Jewish family in the city of Slonim, southeast Poland, in 1912.  At the age of 17  he entered the Académie de la Grande Chaumière and began studying sculpture. After only one year at the academy he decided he would learn more by actually working with sculptors in their studios. Sima studied with Ossip Zadkine, one of the most eminent sculptors of the period. In Zadkine’s studio he attracted the attention of Jean Cocteau. With time Sima met with Jean Cocteau, Paul Éluard, Francis Picabia, Pablo Picasso and Max Ernst.

In those years Sima started to produce photo reportages for press agencies. But Sima did not see himself as a photographer. He identified himself as a sculptor, and sought to find a niche in the art world in that capacity. Michel Sima was a fully-fledged participant of the "Paris School" - a huge "melting pot", in which all artistic movements united, mutually enriching each other. He received commissions as a sculptor and took part in group exhibitions.

After release from the concentration camp Sima returned to the Côte d’Azur, spiritually and physically broken, where he met again Pablo Picasso. He began to photograph the artist in the studio, which became a kind of therapy that helped him return to life. The result was his album ‘Picasso à Antibes’ (1948), which fully corresponded to Sima’s concept that an artist and his oeuvre are one and the same.

In the early 1950s Sima returned to Paris like many of his pre-war friends. With great pleasure he began again to photograph friends. For several years, he created portraits of 60 artists of the “Paris School” which gradually revived after the war.

‘He is not merely a photographer, but a photographer that opened the door behind the scenes, to a creative process that was previously inaccessible... Sima has portrayed the outstanding artists of the last century, his friends. He was part of their world, he came to them not as a professional portrait photographer and observed them not as a journalist — in fact he numbered among them. He saw them just as they saw him, in good faith... What he reveals is something you will find nowhere else: brotherly unity, a striking, remarkable mutual affinity between photographer and model,’ wrote Michel Sima’s close friend Jean-Luc Meysonnier in his preface to the book ‘Michel Sima: Ateliers d’Artiste’, published in 2008. 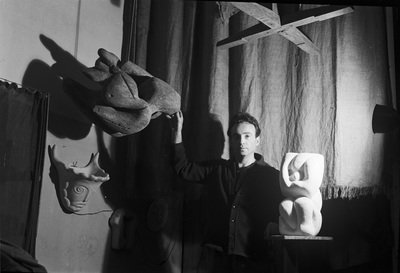