The activity of the Leningrad society “Circle of Artists” is one of the bright, original and, at the same time, extremely characteristic phenomena of its time. Among the many art unions of the 1920s, the Circle of Artists didn’t occupy a leading position, while actuality and results of creative daring of “Circlers” evoked a lively interest.

Founded in March 1926 by graduate students of VHUTEIN, the society “Circle of Artists” at first united mainly fellow students. In the broadcast declaration, young artists define the purpose of their creative efforts: “creating the style of the era”. “Collectivism” and “unity of views” seem to them to be reliable guarantees of future success. Another argument, no less important, in favor of the decision to create a society was the declared “impossibility of participation in the art societies existing in Leningrad”. “We are the former left ... ” - these words, following Moscow artists from “New society of painters”, could be repeated by “Circlers ”.

The core of the future society began to take shape in 1922-1923, and then it was quite obvious that the majority of it were young artists who were influenced by the “left” and had gone through the avant-garde school. The decision to create a society was finally strengthened in March 1926, and in April eighteen painters and sculptors — V. Pakulin and A. Pakhomov, the main initiators of its organization, S. Kupreyanova, T. Gernet, M. Fedoricheva, D. Zagoskin, A. Poret, L. Britanishsky, I. Lizak, G. Lagzdyn, A. Rusakov, T. Kuperwasser, Ya. Shur, G. Kortikov, M. Gelman, E. Gaskevich, S. Chugunov, M. Verbov appeal to main department of scientific, scientific and artistic and museum institutions to approve the charter of the "Circle of Artists". At the constituent assembly, the chairman of the society - V. Pakulin and the secretary - S. Chugunov are chosen. In the Charter and the declaration, the young artistic association declares about its negative attitude to “emphasized individualism, superficial sketchizm and so called literature” in the creation, speaks of the desire to reflect the most significant phenomena of modernity in works of art. Soon the “Circle of Artists” proclaimed that searching for the “style of the epoch” that would be adequate for the time they put the “principle of a closely-knit team that both carries out the general artistic and ideological education of its members and guides their practical work” in the forefront of their ideas. Over the entire period of vigorous activity, “Circle” united more than 50 members in its ranks. Its main composition remained virtually unchanged, only replenishing the influx of young creative forces. The main three exhibitions of the “Circle of Artists” are held in the halls of the Russian Museum in 1927, 1928, 1929 as part of the activities of the recently organized Department of Advanced Trends, headed by N. N. Punin. Along with this, the works of the “Circlers” were exhibited in 1927 in the House of Educators, in 1929 - in the club of the Krasny Triangle factory and at the exhibition “Modern Leningrad Artistic Groups” (1928-1929) in the Moscow-Narvskiy House of Culture. The result of the existence of the association was an exhibition of paintings by artists "Circle" in Kiev (1930). The works of “Circlers” from various years were presented at the First Citywide Exhibition of Fine Arts in Leningrad (1930) and at the exhibition “Artists of the RSFSR for XV years” (1932). The second exhibition, which, as the former “members of the Circle” recall, was visited by A. V. Lunacharsky, became the apogee of the creative activity of the society.

In the forefront of the search for "Circle of Artists" were, of course, painters. Comparing the works of many of these artists and noting the diversity of their handwriting, at the same time you are convinced in their inherent kind of community. This is the desire for the types of images, and the predominance of the peasant theme, in the understanding of which the experience of direct and indirect teachers K. S.  Petrov-Vodkin and K. S. Malevich is noticeable (although in the second and third exhibitions the themes of sports, revolutionary events and holidays, in the interpretation of the closest Society of Panel Artists, sounded on equal terms) and tangible trends of monumentalism in the panel picture, stemming from the declared search for "style of the era.". The new epoch is answered only by the art of “great style”, analogies to which can be found in the traditions of Old Russia and the art of the Renaissance. This part was shared by one part of the “Circlers”, while the other, with no less conviction, tried to combine the achievements of modern French painting with the urgent need to create a “modern Soviet painting”. In 1930, defending themselves against accusations of formalism, the “Circlers” declared: “Our era must have its own style”. They felt “organic with the revolution”, and their sincere faith allowed them to create works that became a real era in the history of Russian art, an era of “Soviet Romanticism”. 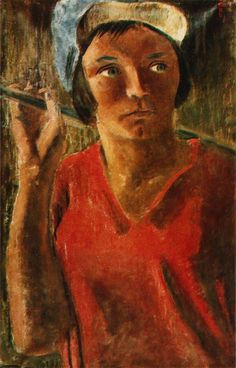