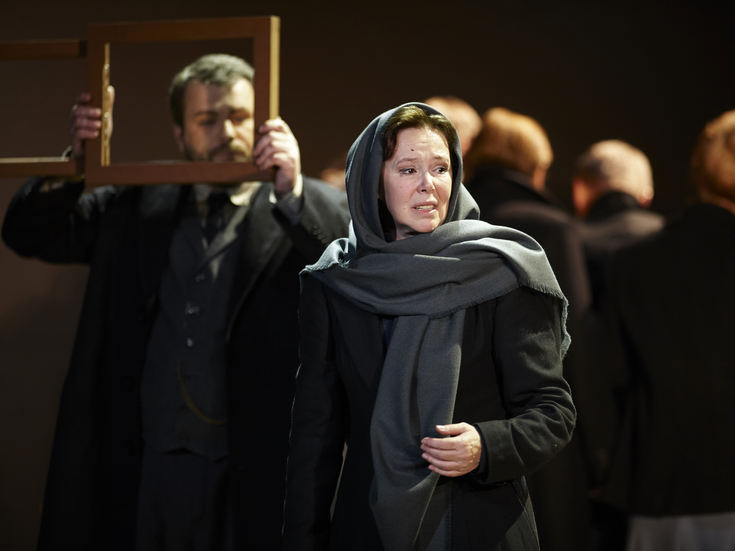 The creation of Mindagaus Karbauskis is a fine metaphysical combination of Leo Tolstoy’s works and biography. Together with the author Marius Ivaškevičius the director weaves an intricate tapestry of several realities and epochs belonging to Leo Tolstoy’s work and personal life, in the center of which stands Sofia Andreyevna. Their love, tortured by Tolstoy’s genius, becomes a reflection of the characters’ feelings. Together with her sons and daughters, Sofia tries her best to win back from the Oblonsky and the Karenins room in her husband’s life and figure out whose story came first: her own one or the ones of his literary mistresses.

“The story of pathological jealousy in Mindagaus Karbauskis’s direction reaches the scale of an antique tragedy – mostly thanks to Evgenia Simonova’s phenomenally believable acting.”

“It seems that not only the plays based on Tolstoy’s works but also the ones written about his life could make up a whole library. Marius Ivaškevičius chose his own, unique path, and very definitely created one of the best, if not the best, play out of this imaginary collection.”

“It has been a while since a Russian play was so captivating, gave so much joy with the turn of its phrase, the unexpected twists of the playwright’s thought, the new angle of eternal themes. A large scale, multi-dimensional play, “Russian Romance” paved a new real, exciting, unpredictable path not only for the director    Mindagaus Karbauskis, but also for the theatre in general.”

He is the holder of youth award “Triumph” (2001), Stanislavsky award, National Theatre Golden Mask award (twice as a director for the plays “When I Was Dying” and “A Story of Happy Moscow”), “Chrystal Turandot” (twice), “Zvezda Teatrala” and the Moscow Theatre Workers Union’s  “Hit of the season” award (three times).

Moscow Mayakovsky Theatre is one of the oldest and most reputable theatres of both Moscow and Russia. It was built in 1886 specifically to host famous theatres and actors on tour from abroad. Its stage witnessed performances of Sarah Bernard, Eleonora Duse, Ernst von Possart, Jean-Sully Mounet, Coquelin aîné, Alexandre Honoré Ernest Coquelin and many other celebrities. First the theatre in this building started functioning in 1920 as Terevsat (Theatre of Revolutionary Satire), then from 1922 as Revolution Theatre, headed by V. Meyerkhold.