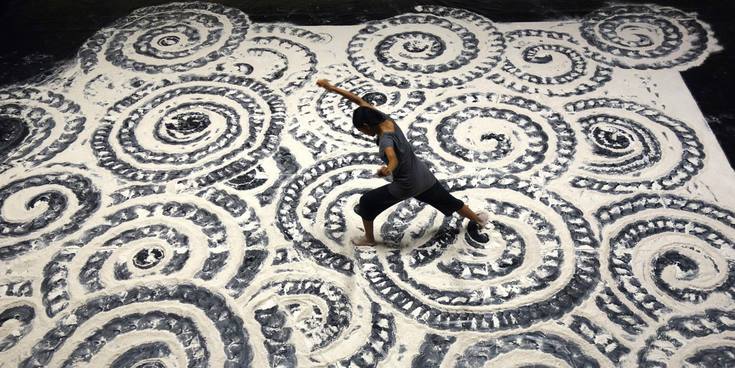 
Supported by the Francais Institut in Russia.

Aurélien Bory creates choreographical “portraits” for famous dancers. His previous work “Plexus” staged especially for Kaori Ito, had great success at Platonov festival in 2016 – the tickets were completely sold out a few hours after the start of the sales.

This year we will be sharing with the audience Aurélien Bory's new creation – an exotic spectacle created together with Shantala Shivalingappa, one of the world's most famous performers of traditional Indian dance Kuchipudi. This is a magic, mesmerizing solo about the fight of the human and the divine beautifully combines articulated poses with a sacred ritual.

"In Shantala Shivalingappa’s name, we find Shiva, the lord of the dance. According to the texts, Shiva has over one thousand names. He is the god of creation and destruction. Lord of cremation grounds, his body is covered with ash. Shantala Shivalingappa’s dance revolves around the figure of this god, whose vibration gives rise to the rhythm of the world".

"With her strong and lively little silhouette, Shantala Shivalingappa, graceful as a gazelle, embodies Shiva.... The viewer will remember the splendid impact of what he has just witnessed for a long time afterwards."

"The force of this creation, part human part divine, overwhelms us".

"Shivalingappa takes articulated and precise poses, based on Kuchipudi and referring to both prehistoric and contemporary art".

Aurélien Bory is a French choreographer and director, the founder of CIE 111 company, who is working with “physical theatre” both in its pure form and on the borderline between a number of arts – theatre, circus, dance, visual arts, and music.

Shantala Shivalingappa is a world renown dancer, performer of classical Indian Kuchipudi, who spent a long time with Pina Bausch's Tanztheater Wuppertal. In 2013, she was awarded the prestigious «Bessie» dance award in New York City.

Since the age of 13, she has had the privilege of working with some of the greatest artists of our times: Maurice Béjart (“1789…et nous”), Peter Brook (for whom she played Miranda in “The Tempest” and Ophelia in “Hamlet”). She was then invited by Pina Bausch to dance in “O Dido”. She also collaborated with Sidi Larbi Cherkaoui in “Play”.

Driven by a deep desire to bring Kuchipudi to the western audience, she has performed in important festivals and theatres (such as Théâtre de la Ville-Paris, Sadler’s Wells–London, Jacob’s Pillow Festival (USA), New York City Center and more. Both in India and in Europe, she has earned admiration from the audience and the press, who invariably praise her perfect technique, flowing grace and very fine sensitivity.


Supported by the Francais Institut in Russia.