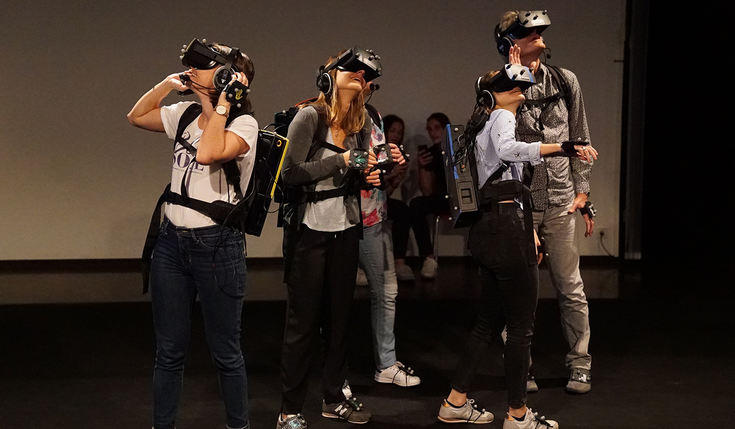 Participant of Lyon Dance Biennale, Romaeuropa theatre festival and many others.

The official choice of the 75th International Cinema Exhibition at Venice Biennale in 2018.

The viewers exploring the virtual reality gain a unique sensory experience. Equipped with VR headsets and backpack computers, 5 viewers move freely in total virtual space, inhabited by virtual dancers, interacting with them and each other, as their avatars reproduce their movements.

This is the first choreographic piece in the world with total immersion.

The show will be performed at the Festival with the support of Pro Helvetia.

“This is a shared dancing experience.”

“There are several digital projects at the Biennale de la danse in Lyon, but the standouts are two innovative virtual-reality works, commissioned from the choreographers Yoann Bourgeois and Gilles Jobin, which have been wildly popular, with long waiting lists for tickets.”

Gilles Jobin is a Swiss dancer, innovative choreographer and director, acclaimed as one of top European choreographers. Since 1995 he has been staging dance shows receiving raving reviews from both press and the public. His portfolio includes over 20 shows, among which are A+B=X (1997) and The Moebius Strip (2001). In 2003 for Geneva Ballet he staged TWO-THOUSAND-AND-THREE, which “expands the borders between the classic and the contemporary” (Libération). In 2013 he staged QUANTUM, which successfully toured all over the world. In 2015 Gilles Jobin received Swiss Grand Award. As a fan of new technologies, in 2016 he created a 3D-film WOMB, which received an award as the best experimental film at San Francisco Dance Festival. Then came FORÇA FORTE show, in which Gilles Jobin first tested motion capture technology.

Seassions from 2 pm to 9 pm