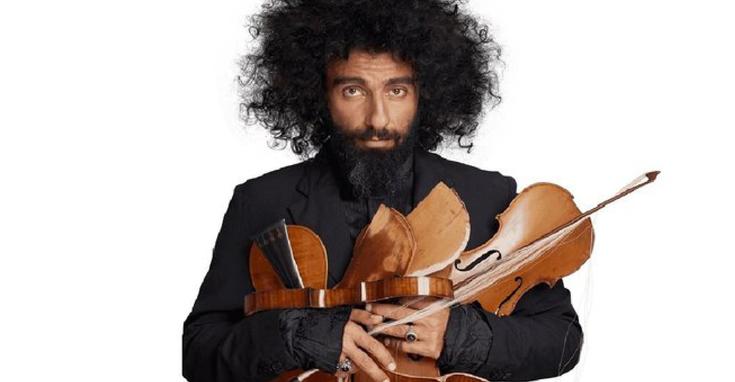 Ara Malikian is a Spanish violinist, originally Lebanese of Armenian descent, born in 1968 and currently living in Madrid, Spain.

He performed his first important concert at the age of twelve and, at the age of fourteen, orchestra director Hans Herbert-Jöris listened to him and got him a scholarship given by German Government to study at Hochschule für Musik und Theater Hannover. At the age of 15 he achieved to be the youngest admitted student in this well-regarded superior music center. He widened his knowledge and studies afterwards at Guildhall School of Music & Drama of London and, also received lessons by some of the greatest and more prestigious teachers in the world as Franco Gulli, Ruggiero Ricci, Ivry Gitlis, Herman Krebbers or some members of the Alban Berg Quartet.

In 1993, he received the Artistic Compliance and Dedication Award, given by the German Ministry of Culture. He has also been given the “Best Musical Composition in Scene Spectacle MAX Award for Performing Arts” (La Lucha Libre Vuelve al Price, 2011) and has been twice award-winning at Music Awards in the category of New Musics Best Album (De la felicidad, 2006) and Best Classical Music Performer (Ínsula Poética, 2007). In 2013, his own orchestra “La Orquesta en el Tejado” was premiered at the Spanish Theatre in Madrid.

An inexhaustible musical and human inquisitiveness have made Ara Malikian delve into his own Armenian roots and assimilate the music created in other cultures from Middle East (Arabic and Jewish), Centre Europe (Gypsi and Klutzier), Argentina (Tango) and Spain (Flamenco), always showing a great own language with the virtuosity and expressivity of the great classic european tradition. He premiered the concert Músicas Cíngaras (2009) which brings together melodies from di erent coun- tries that have been musically in uenced by the travel made by the Gypsies from India to Spain. He also co-produced the show Payo Bach (2011) accompanied by the amenco guitarist José Luis Montón. Ara Malikian has collaborated with Lebanese singer Fairud, amenco dancers Joaquín Cortes and Belén Maya in New Tango Ensemble and with jazz pianist Horacio Icasto among others. He has taken part in several albums by Extremoduro like La Ley Innata (2008), Material Defectuoso (2011) and Para todos los publicos (2014) and in Ambrosia (2014), an album made by Juan Antonio Valderrama.

There is another side in Ara Malikian’s career, his work has been requested by different top motion pictures music composers like Alberto Iglesias, for whom he recorded the original soundtrack for Hablé con ella (2002) and La mala educación (2005) by Pedro Almodóvar or Pascal Gainge for El otro barrio (2000) by Salvador García Ruiz. And he has also taken part in the original soundtracks for the lms Manolito Gafotas (1999), Los pasos perididos (2001) and Pájaros de papel (2010). Besides, Ara Malikian is a standing world famous personality, a quality that allows him to cooperate with projects aimed to improve the life of the most disadvantaged people every single time he is able to do it, especially when it comes to kids. He is annually collaborating with NGO “Action against hunger.