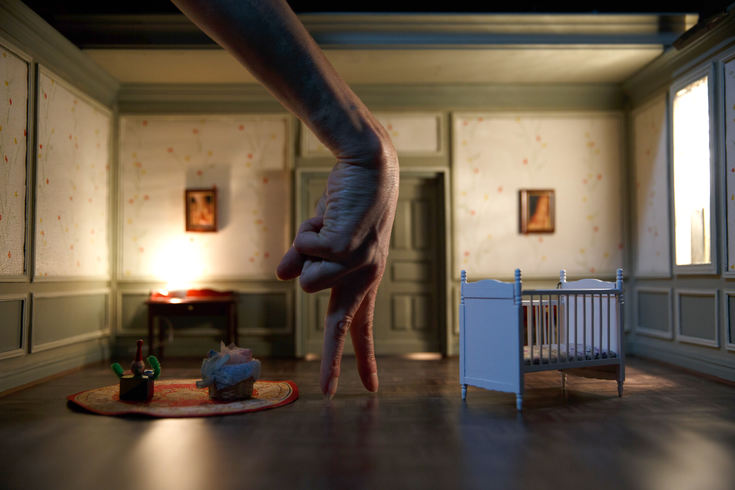 The show had phenomenal success at the Edinburgh International Festival in 2018 and received ecstatic reviews from British and world press.

The house lights go down. The camera starts. Action! Fingers dart about in a wonderful miniature decor, cameras float and dance along, a hypnotizing voice narrates. Choreographer Michèle Anne De Mey and film-maker Jaco Van Dormael make a film before your very eyes.

The poetic trip full of stunning visual discoveries takes place on the divide between life and death. “Cold Blood” is a virtuoso ode to the fragility of life and the magic of theatre.

The Globe and Mail

★★★★★ “This ingenious theatrical treat, created with dancing hands, has a dark emotional undertow.”

★★★★★ “Almost impossible to describe in any way that does it justice.”

★★★★★ “This is the most magical show, original and creative, which takes a child's playbox of toys and transforms them into a resonant, sophisticated piece of theatre.”

Jaco Van Dormael is a famous Belgian film director whose filmography includes “The Brand New Testament”, “Mr.Nobody”, “Toto the hero”, “The Eighth Day” and others.

His short film received the Honorary Foreign Film Award at the 1981 Student Academy Awards. He won the César Award for Best Foreign Film and the Camera d'Or for “Toto the Hero” at the 1991 Cannes Film Festival. He has also received a BAFTA and a Palme d'Or, as well as the Cannes Film festival nomination.

Michèle Anne De Mey is a Belgian choreographer and former student at Mudra, the school founded by Maurice Béjart. She worked with Anne Teresa De Keersmaeker for six years on her famous “Fase”. In 1990, she founded her own company Astragales.

In 2011, Jaco Van Dormael and Michèle Anne De Mey created their first show “Kiss&Cry”, which received raving reviews and then went on a world tour. “Cold Blood” is their second work in this format, their third collaboration Amor is a solo performance. Kiss&Cry collective have never been to Russia, so the Platonov festival audience will be the first to witness their magic work.

Thomas Gunzig is a writer and playwright, the holder of numerous Belgian literary awards. His works have been translated to a number of languages, including Russian. His most famous novels are “Mort d'un Parfait Bilingue”, “Le Plus Petit Zoo du Monde”, “A Part Moi, Personne N'est Mort” and “Kuru”.