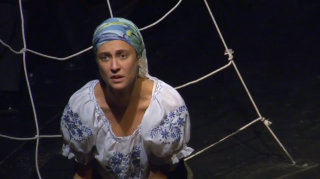 In English with Russian subtitles

This year, commemorating Andrey Platonov’s 120 years anniversary, the festival’s ambition is to demonstrate not so much the fact that the great writer’s heritage is alive on stage, but rather that his ideas and vision can be a source of inspiration for contemporary directors, playwrights and performers. In this sense this year’s programme will be very multidimensional: there will be an attempt at direct staging of Platonov’s work (the American version of “14 Little Red Huts”), an original approach to creating a play based on his short story in a British play “Bliss” and a theatrical statement about current affairs using elements of Platonov’s works (an international project “Translation”).

This is the first time Platonov’s texts have been used in American theatre.  «2017 has already brought much reflection and commentary on the Bolshevik revolution that shook the world 100 years ago. Right on time – again – Platonov’s powerful, unsparing, clear-eyed dramatization of some of the terrible consequences of the revolution is right where it should be: on stage», Medicine Show Theater states.

Ioan Ardelean is a Romanian-born American theatre and cinema actor. His accolades include the Debut Award at Contemporary Theatre Festival-Brasov-Romania and nomination for The Best Actor at Hop Festival-Costinesti-Romania.

He has assembled an extensive list of stage, commercial and film credits. His repertoire includes Shakespearean productions and modern plays at The National Theatre in Cluj-Napoca-Romania, The Almeida Theatre in London and several Off-Broadway productions in New York City.

Medicine Show Theatre Ensemble is a company of professional theatre artists dedicated to offering creative alternatives to a conventional theatre by creating and presenting works that experiment with language, music, movement, form and ideas, and meld the strengths of theatrical tradition with innovation.

In English with Russian subtitles