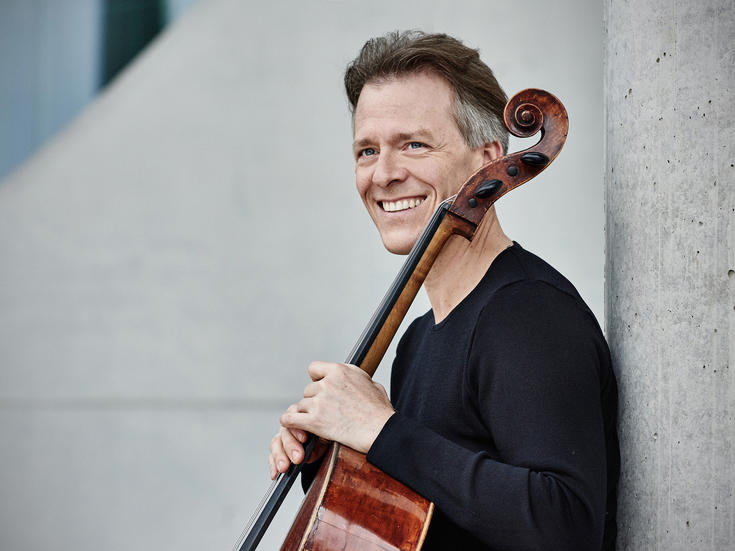 Alban Gerhardt has, for twenty-five years, made a unique impact on audiences worldwide with his intense musicality, compelling stage presence and insatiable artistic curiosity. His gift for shedding fresh light on familiar scores, along with his appetite for investigating new repertoire from centuries past and present, truly set him apart from his peers.

Gerhardt will also give recitals at The Phillips Collection Museum in Washington D.C., London’s Wigmore Hall, and Shanghai Concert Hall. Next season sees the development of a new project ’Love in Fragments’ with the violinist Gergana Gergova, choreographer Sommer Ulrickson, and sculptor Alexander Polzin, in a bringing together of music, movement and the spoken word which receives its US premiere at 92St Y.

Gerhardt is passionate about sharing his discoveries with audiences far beyond the traditional concert hall: outreach projects undertaken in Europe and the US have involved performances and workshops, not only in schools and hospitals but also pioneering sessions in public spaces and young offender institutions.

His collaboration with Deutsche Bahn, involving live performances on the main commuter routes in Germany, vividly demonstrates his commitment to challenging traditional expectations of classical music. In early 2017, Gerhardt founded #Musicians4UnitedEurope (www.musicians4unitedeurope.com), a group of international musicians working together to voice their support for a united and democratic Europe.

He is a keen chamber musician; his regular performance partners include Steven Osborne, Cecile Licad, Baiba Skride and Brett Dean. Gerhardt has collaborated with composers including Jörg Widmann, Unsuk Chin, Brett Dean, Julian Anderson and Matthias Pintscher; and in almost every case he commits to memorising their scores before world premiere performances.

A highly acclaimed recording artist, Gerhardt has won several awards, and his recording of Unsuk Chin’s Cello Concerto, released by Deutsche Grammophon, won the BBC Music Magazine Award and was shortlisted for a Gramophone Award in 2015. Gerhardt has recorded extensively for Hyperion, his latest recording of Rostropovich’s ‘Encores’ released in January 2017. In 2019 his complete recording of the Bach suites will be released.

“One of the finest cellists around – expressive, unshowy and infinitely classy.”

Voronezh Academic Symphony Orchestra, one of the leading Russian orchestras, was created in 1925. His founder and the first chief conductor was D. Arkhashumov.

Since 1972 the orchestra has been led by chief conductor and artistic director Vladimir Verbitskiy. In 1995 for its contribution to the development of Russian music culture the orchestra was awarded the title “academic”. The orchestra is a frequent participant of national and international competitions and festivals and was awarded at the first radio competition “Orpheus” in 2002. The orchestra actively tours not only in Russia but also in Europe in Asia, including Czech Republic, France, Spain, Germany, Italy, Hong Kong, and Taiwan.