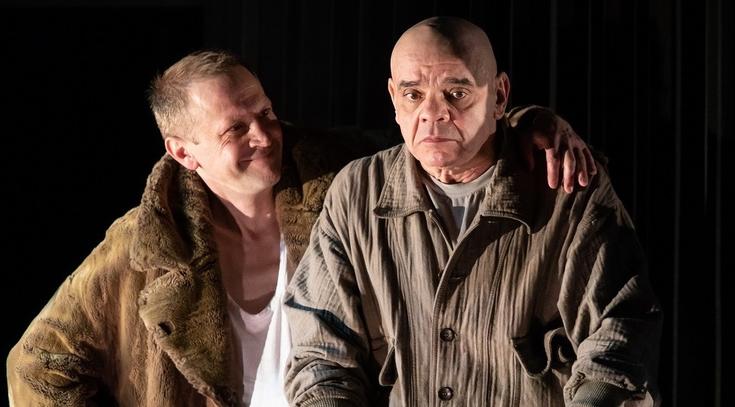 Molière's eternal comedy is performed by the best actors of Satirikon theatre.

A successful tandem of a young, but already famous director Egor Peregudov and the brilliant actor Konstantin Raykin was born in 2015 in “A Man from the Restaurant” and continues to live up to the highest theatrical standards.  The critics agree that the play is destined to become Satirikon’s new hit.

“To say that Raykin’s acting is great is to say nothing at all. His virtuoso lines and his total commitment to the part invariably brings applause after at the end of every monologue.”

“Egor Peregudov took Molière's characters beyond space and time, masking under the playful title a philosophical fable about freedom and responsibility.”

“Konstantin Raykin's and Egor Peregudov's duet is brilliant: both seem to have been born to play Molière's characters.”

“Every movement and every action on stage seems an insight, and improvisation feels as precise as a rigorously rehearsed scene.”

Egor Peregudov is a theatre director and professor, who studied at Sergey Zhenovach's group in GITIS. Since 2011 he has been a full time director at Satirikon, and since 2018 – the head director at RAMT. He has worked with Satirikon since 2015.

Russian state theatre Satirikon named after A. Raykin has a rich history connected to the name of its founder Arkadiy Raykin and the work of his son and successor Konstantin Raykin. In 1939 the theatre opened as the Leningrad Theatre of Entertainment and Sketches. In 1982 it moved from Saint Petersburg (then Leningrad) to Moscow, and in 1987 changed its name to Satirikon.

The theatre has two grand prix awards from the Belgrade BITEF, and its plays have received numerous Golden Mask National Theatre Awards.