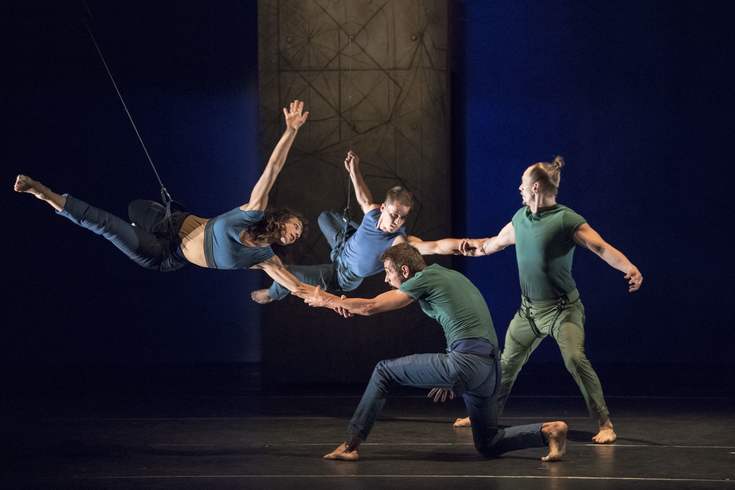 Other dates and times
Opera and Ballet Theatre
National Choreographic Centre in Créteil and Val-de-Marne / Company Käfig (Créteil, France)
Choreographer – Mourad Merzouki
Premiere of the performance in Russia!
The world premiere - September the 8th, 2018 at the Biennale de la danse in Lyon, France
Duration - 1 hour and 10 minutes without an intermission
6+

The music for the captivating and magic spectacle was written by Armand Amar – the famous composer and arranger, the author of soundtracks for over 2 dozen films and the holder of the César Award for Best Music.

Mourad Merzouki is one of the most famous European choreographers, who combines in his work a number of hip-hop and break dance techniques with contemporary dance, circus and other art forms. In his previous work “Pixel”, which had great success in Moscow, the performers were dancing in 3D space. In this new work – “Vertikal” Merzouki explores aerial space, combining hip-hop with vertical dance.

“Thanks to the construction created by Fabrice Gilliot, an aero-technology specialist, the dancers leave the ground, climb the walls and fly as if they were gravity-free.”

“Overwhelmed by the beauty of the pictures and the virtuosity of never-endingmovement, what the audience experiences are a total pleasure.”

“Strong images, bodies that produce the sensitive and sensuality so rare for hip-hop, form the base of a surprisingly beautiful spectacle.”

“Merzouki is a star whose new creation “Vertikal” 10 nights in a row fills up Lyon Dance Hall… His dance is ingenious and popular.”

“Once again, after “Pixel”, Merzouki demonstrates the fact that he is an outstanding choreographer. He can address a wide audience without compromising quality.”

Mourad Merzouki is a choreographer, dancer and the artistic director of Käfig company, which he founded in 1996. He is also the director of CCN (National Choreographic Centre) in Créteil and Val-de-Marne since 2009. Since 2013 the center hosts a national hip-hop festival “Kalypso”.

Officer of French Ordre des Arts et des Lettres, laureate of SACD and “Lumières de la culture” awards, he has also been granted the medal of honor of the city of Lyon.

The world premiere - September the 8th, 2018 at the Biennale de la danse in Lyon, France
Duration - 1 hour and 10 minutes without an intermission
6+