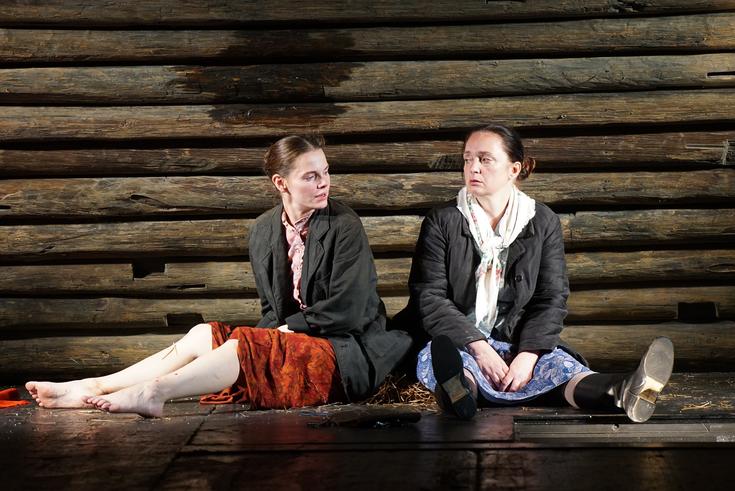 In 2015 Lev Dodin brought back to stage his legendary 1985 “Brothers and Sisters” play, this time with a new and younger cast. This is a story of Pekashino village dwellers’ lives during World War II and in post-war times. The format is quite unusual: it consists of two parts, each one lasting 3 hours, which means that the audience spends an entire afternoon in theatre.

“A legendary play, which stunned the world, has now been brought back to life with a new and younger cast. This, however, is not a remake, but rather a new take on Abramov's novel. “Brothers and Sisters” is a canvas with many characters, an ensemble piece with no support roles, but rather stories of people who have become history and have been granted eternal lives thanks to the play.”

“The complexity of stage blocking, the light, the sound, the direction makes no other play, even Dodin's own ones, a rival to this one. The way Eduard Kochergin's masterful design works here is amazing. The rhythm of the transitions is superb. The variety of blocking makes everyday life and merging seamlessly and Pekashino living becomes a saga of the nation's life.”

Lev Dodin is the artistic director and the head of Maly Drama Theatre. He is a member of the General Assembly of The Union of European Theatres (UTE). In 2012 he was elected honorary president of UTE.

Lev Dodin has won numerous prizes and titles, among which are Stanislavsky award, the Golden Mask National Theatre Award, the Laurence Olivier Award, and the prestigious Europe Theatre Prize. He is also an officer of the French Ordre des Arts et des Lettres and a winner of the 2012 Platonov Award.

Maly Drama Theatre was created in Leningrad in 1944. In 1973 it was headed by Efim Padve, who was focusing on staging serious drama pieces and invited a number of young directors to work for the theatre. Lev Dodin was among them. Gradually, the theatre was gaining popularity in the city and becoming known in the circles of theatre connoisseur. The 1980 premiere of “Don” based on Abramov’s novel marked the birth of the artistic phenomenon later to be known as “Lev Dodin’s theatre”.

In 1983 Lev Dodin became the theatre's main director, and in 2002 – its artistic director. In 1984 he staged a two-part “Brothers and Sisters” play based on Abramov’s novel, which was joined by “Don” to form a trilogy. Over the 30 years of its stage life, the play has been shown at all European capitals, in the USA and Japan, received numerous awards, including the 1986 USSR State Prize, was named “best foreign performance of the year” in the UK in 1991 and received an Italian UBU award in 1995.

In 1988 the theatre had its first major tour abroad. In 1994 the government of France awarded Lev Dodin with the status of an officer of the French Ordre des Arts et des Lettres “for his great contribution to collaboration between Russian and French cultures”. In 1998, by the decision of the Union of the Theatres of Europe, MDT was awarded the status of the Theatre of Europe. Only three theatres in the world have this status, the other two being Odeon in Paris and Piccolo Theatre in Milan.

Since 1998 MDT has been taking part in the annual National Theatre Award Golden Mask, and has won the prestigious prize for its plays on several occasions.

2015 saw the premiere of the “second edition” of “Brothers and Sisters” with the young cast of MDT.