Theatre Parade, which annually marches along the Revolution Avenue on June the 12th, is changing its format. This time it will be a proper contemporary arts piece, a massive and coherent street performance. The concept of the parade, the sketches of arts objects and costumes are being created by the art-group KTOMY, led by a famous theatre artist Anastasia Nefedova.

This year the theme of the parade will be Alexander Pushkin’s works, his rich biography and myths connected with his life. The great poet and his characters will be reinvented in the twenty-first century and will take to streets of a modern city. It will not be Pushkin’s classical images the way we are used to seeing them, but rather what his characters could be if they were living now, in the age of the Internet, mosaic thinking and mass culture.

The parade will consist of 15 parts – 15 groups, with each one bringing to life one of Pushkin’s stories. All in all, at the parade there will be over 120 objects and characters. The participants will be acting out mini-plays, dancing, reciting poems, doing rock-concerts and interacting with the audience.

Why classify the genre as duel? Behind the parade’s concept lies an idea of a metaphysical duel between Pushkin the Creator and Pushkin the Person. The audience and Voronezh itself perform as the seconds, the witnesses of an on-going duel between the Artist and the Personality.

The parade is being invented and implemented by the art group KTOMY. Its art director and main ideas generator is Anastasia Nefedova – the lead artist at Electrotheatre STANISLAVSKIY, the holder of the Golden Mask award as the Best Costume artist in Musical Theatre (for an opera series Serliytsy), the author of over 350 complex and sophisticated costumes for the play The Blue Bird (directed by Boris Yukhananov), an artist for a number of large-scale television and cinema projects, an instructor and head of Theatre and Cinema Design department at Higher School of Economics Design School and an instructor at Individual Directing Workshop (MIR-5).

Other members of the art group are: 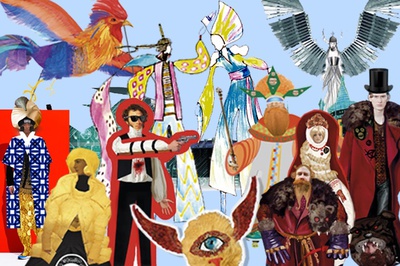