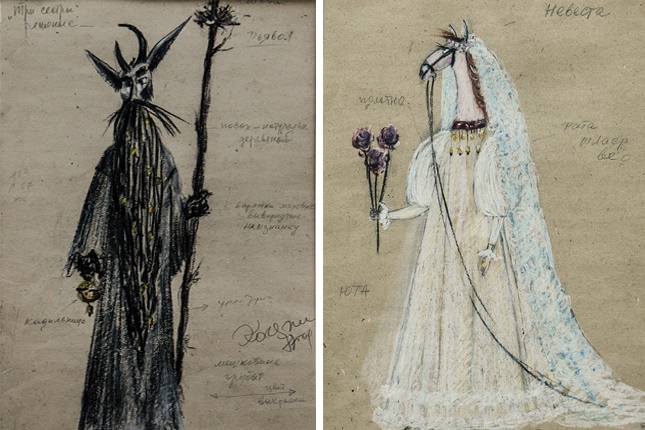 Eduard Kochergin is a prominent theatre artist, the artistic director of the Bolshoi Drama Theater named after G.A. Tovstonogov (since 1972). He has created design work for more than 200 plays in Russia and abroad, including those done on the stages of the Moscow Art Theater named after A.P.Chekhov, the Maly Drama Theatre, Mayakovsky Theatre, Mossovet State Academic Theatre, Moscow Sovremennik Theatre, Taganka Theatre, Et Cetera, the Maly Drama Theatre, Theatre Europe, in theatres of Finland, Yugoslavia, Poland, Hungary, France, Germany, USA, Canada and Japan. He has worked with many prominent theatre directors, among whom there are Georgy Tovstonogov, Anatoly Efros, Yuri Lyubimov, Kama Ginkas, Henrietta Janovskaya, Lev Dodin and many others.

Eduard Kochergin has had a number exhibitions, both in Russia (in A.A. Bakhrushin State Central Theatre Museum, St.Petersburg State Museum of Theatre and Music) and abroad (in France, Finland, Canada and Poland). Only last year, which was the artist's anniversary, his exhibitions were held in The State Hermitage Museum and the A.A. Bakhrushin State Central Theatre Museum. These exhibitions were his personal ones and covered the whole period of his work on the stage.

Platonov Festival this year will be offering an unusual exhibition of Kochergin: his scenography related to the works of great Russian classical writers: Fedor Dostoevsky, Leo Tolstoy and  Anton Chekhov. The exhibition will cover not only the plays based on their works, but also plays connected with their lives. "My Mocking Happiness" by Leonid Malyugin - is a play based on Chekhov's correspondence with his family and friends, and "Come Full Circle" by Ion Drutse is focusing on Leo Tolstoy’s last days.

Kochergin has always set the goal to translate the Russian classics’ depths of thought and emotion to the language of plastics. The exhibition will show how the artist while keeping his own perspective, his own creative individuality, has been able to break through to Dostoevsky, Tolstoy and Chekhov. In "A Gentle Creature" by Dostoevsky he was able to fill the stage with such energy of the clash of the  "underground man" with himself that every day simply dissolves in the drama of the pulsation of his restless soul. "The Story of a Horse", based on "Kholstomer" by Leo Tolstoy became a Russian theatre classic. The director Georgy Tovstonogov called the sets he created "a stable and the universe at the same time", realizing that “the conceptual depth of the performance was conveyed through brilliantly and sharply laid out stage space and the most simple of materials used for the sets – the canvas”.

The audience will be able to see the work of the stage artist not separated from the play itself, but as its integral part: apart from sets and costumes sketches there will be models and photographs from the plays themselves – both mise-en-scenes and the actors’ close-ups.