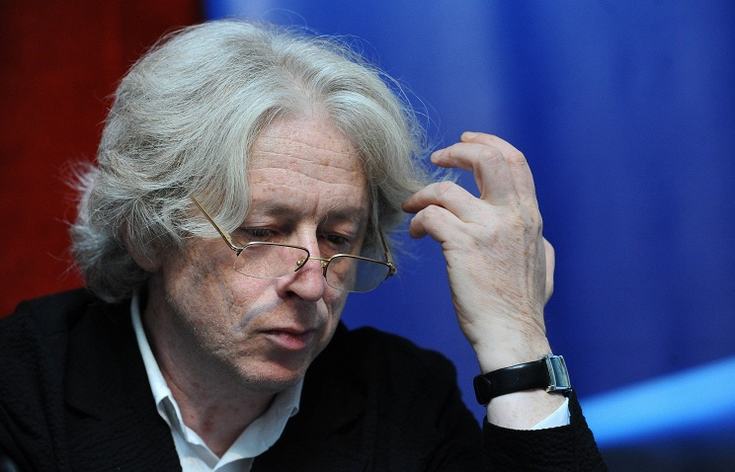 Program:
I part:
Twelve preludes from the piano cycle «Bukovinian songs» (first performance in Russia);
«Tracing Astor» for the piano quartet;
Two pieces for the violin and piano for the «Sunset» film: «Death of Avessalom» and «Tango»;
Hommage à Astor Piazzolla – two transcriptions of tango: «My happiness» (Е. Rozenfeld), «This is the Last Sunday» (Е. Peterburski).

Platonov festival continues to introduce the audience with contemporary composers and invites the spectators to the evening, dedicated to Leonid Desyatnikov art.

Leonid Desyatnikov is one of the most widely played modern Russian composers. Laureate of the State Prize of Russian Federation, honored art worker.

Leonid Desyatnikov was born in 1955 in Kharkiv.  After the graduation of the school at Kharkiv Art Institute, he entered Leningrad Conservatory named after Rimsky-Korsakov, where he studied composition at Boris Arapov class and instrumentation from professor Boris Tishenko. Since 1973 he lives in Saint-Petersburg.
As a 3d year student, Desyatnikov wrote his first opera «Poor Liza» after Nikolay Karamzin novel. This opera was then staged by Yury Borisov in Moscow Chamber Music Theatre named after Boris Pokrovsky.

Desyatnikov has been collaborating with Gidon Cremer since 1996 as a composer (Wie der Alte Leiermann...; the chamber version of Sketches to Sunset; Russian Seasons) as well as arranging the works of Astor Piazzolla, including the tango-operita Maria de Buenos Aires.


He wrote operas: «Nobody Wants to Sing or Bravo-bravissimo, Pioneer Anisimov» and «Vitamin of Growth», staged in Musical Theatre for Young Audience «Looking Glass»; «The Children of Rosenthal»- in Bolshoi Theatre; vocal cycles- "Love and the poet's life" after poems of Nikolai Oleynikov and Daniil Kharms, "Five poems of Tyutchev"; cantata " Pinega legend of the duel and the death of Pushkin" and "the Gift" after the verses of Gavrila Derzhavin; "Leaden echo» after  the poems of Gerard Manly Hopkins. He is also the author of the ballet "Love song in a minor» and other works.

For a long time Desyatnikov actively cooperated with the Alexandrinsky theatre, for performances of which he created musical accompaniment. In 2009-2010 years he worked as a  Music Director of the Bolshoi theatre of Russia.

He performs in Russia and Europe, records CD, runs music programs at 5th Channel(«Night. Sound. Goribol»), participates in music festival. He is known as a passionate propagandist of Leonid Desyatnikov music and a first performer of his works of a composer. He was also a musical director of the films: «His wife’s diary»(directed by Alexei Uchitel), «Moscow» (directed by Alexander Zeldovich, Gran-Prix of IV  International Musicfilm biennial in Bonn) and «There is no death for me» (directed by Renata Litvinova).

From 2004 to 2007 he supervised The Art Festival in Kostomuksha (Karelia). Since 2008 he is one of the main supervisors and organizers of  The Levitan festival in Ples and an artistic director of the  Russian-Finnish musical and poetic festival «In the Vyborg’s direction». An artistic director of the Britten evenings in Bolshoi Theatre of Russia (2013). Since 2013 he is one of the organizers and leaders of the annual cycle of music programs in Multimedia Art Museum (Moscow).

Аlexander Trostyansky – an eminent violinist, laureate of many prestigious music contests and awards.

Since1997 Alexander Trostyansky is a professor of Moscow State Conservatory.

Program:
I part:
Twelve preludes from the piano cycle «Bukovinian songs» (first performance in Russia);
«Tracing Astor» for the piano quartet;
Two pieces for the violin and piano for the «Sunset» film: «Death of Avessalom» and «Tango»;
Hommage à Astor Piazzolla – two transcriptions of tango: «My happiness» (Е. Rozenfeld), «This is the Last Sunday» (Е. Peterburski).