The stars of the world opera 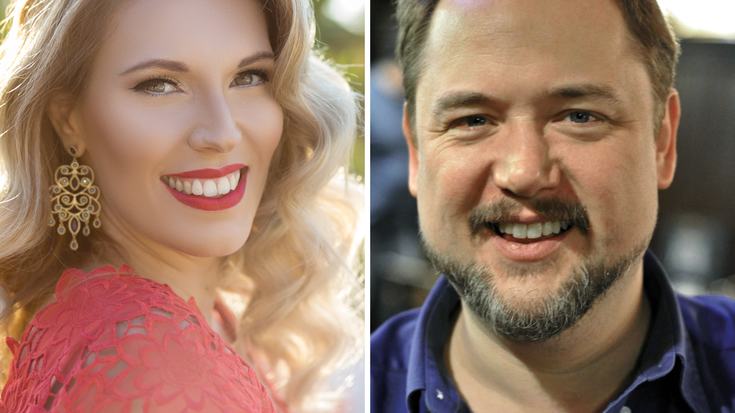 Platonov festival continues to present the Art of Opera in terms of its Music Program.  Concerts with participation of Habla Gerzmava, Iwona Sobotka , opera singers from USA and CIS were already held at the festival. Each of these events gained spectators’ appeal. In this year we would like to present one of the most eminent tenors of the world Mark Heller and a young star Christina Poulitsi.

Christina Poulitsi rapidly establishing herself as one of the most thrilling vocal talents to have emerged in recent years, Greek soprano Christina Poulitsi has drawn praise for her “crystal clear intonation” and “warm lyric colour”.

Christina’s 2017/18 season opens with her Royal Opera debut in London, performing as Queen of the Night under the baton of Julia Jones. Christina continues to perform this role with Opéra-Comique in Paris, on tour across Japan with Komische Oper, and Hamburg Staatsoper with Mo. Jean-Christophe Spinosi.

In concert she will perform at the Théâtre des Champs Elysées with Orchestre de Chambre de Paris conducted by Yvan Cassar, in an all-Mozart programme which will feature on France 3 TV, and will join Mo. Gianandrea Noseda on a tour throughout Spain with Orquestra de Cadaqués, performing Mozart’s Requiem.

The success of her debut at Maggio Musicale Fiorentino in December 2015 singing Gilda in Rigoletto, led to further performances with Mo. Zubin Mehta in a series of concerts with the Israel Philharmonic Orchestra, performing arias by Mozart (Donna Anna), Verdi (Violetta) and Donizetti (Lucia).

Christina was named Best New Artist by the Union of Greek Critics of Drama and Music for her performance as Gilda in Rigoletto at the Greek National Opera in 2014. In the same year, she was a finalist in Placido Domingo’s “Operalia” competition, and had previously won 1st Prize at the International “Nico Dostal” Competition in Vienna.

"Her voice has body and she is remarkable in coloratura, hitting the top notes without any problem. There's no question that she is one of the best interpreters of the character today"

Dmitry Korchak is an international superstar. The singer performs on the best opera stages (La Scala, Covent Garden, Metropolitan Opera, etc.) and takes part in the leading festivals of the world, including the well-known Salzburg Festival.

"One of the leading tenors of our day"