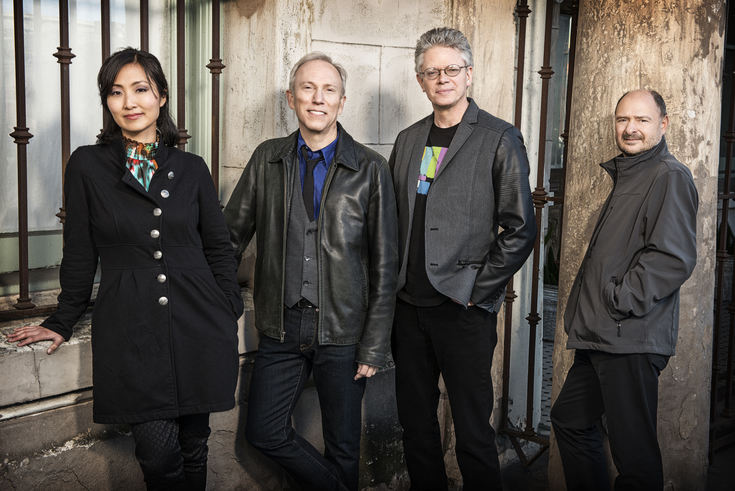 For more than 40 years, San Francisco’s Kronos Quartet has pursued a singular artistic approach, combining a spirit of fearless exploration with a commitment to continually reimagine the experience. In the process, Kronos has become one of the most celebrated and influential groups of our time, performing thousands of concerts worldwide, releasing more than 60 recordings of extraordinary breadth and creativity, collaborating with many of the world's most intriguing and accomplished composers and performers, and commissioning more than 900 works and arrangements for string quartet. Kronos has received over 40 awards, including the Polar Music and Avery Fisher Prizes, two of the most prestigious awards given to musicians, and what’s more- several Grammy Awards.

Kronos’ work has collaborations with many of the world’s foremost composers, including “Father of Minimalism” Terry Riley, on projects such as the NASA-commissioned Sun Rings (2002 on NASA request) and The Serquent Risadome (2014); Philip Glass on an all-Glass CD in 1995 and recent premieres of String Quartets No. 6 (2013) and No. 7 (2014); Azerbaijan’s Franghiz Ali-Zadeh, featured on the 2005 CD Mugam Sayagi; Steve Reich, with whom Kronos has recorded the Grammy-winning composition Different Trains (1989), Triple Quartet (2001), and WTC 9/11 (2011); and many more.

Kronos’ work has been featured prominently in films, including the Academy Award–nominated documentaries How to Survive a Plague (2012) and Dirty Wars (2013). Kronos recorded full scores by Philip Glass (Mishima and Dracula), Clint Mansell (Darren Aronofsky’s Noah, The Fountain, and Requiem for a Dream), Terry Riley (François Girard’s Hochelaga terre des âmes), and Jacob Garchik (Guy Maddin’s The Green Fog— A San Francisco Fantasia), as well as contributed music to 21 Grams, Heat, La grande bellezza (The Great Beauty), and many other films.