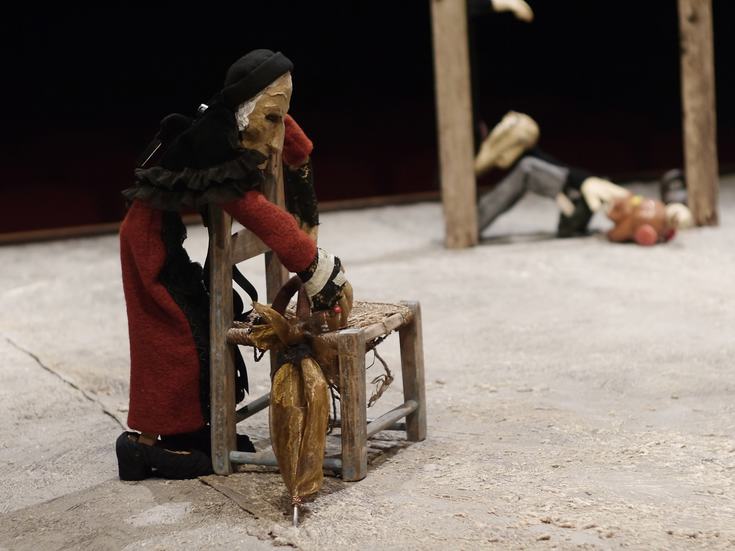 For the first time in Russia!
Duration – 1 hour without intermission
Public: 16+

The premiere took place in 2016

This puppet show without words was shown successfully in Turin at the International festival Incanti in the fall of 2017.

Puppets participating in the play is a reproduction of puppets created by Sardinian artists Giuseppina and Albina Coroneo in the period since the end of World War II until the seventies of the last century.

The puppets personify cute and fragile old people whose lives have been destroyed by the war. There are 10 characters on stage: 5 female and 5 male figures. Among them Tristan, the man with balloons, Mariedda in search of occasional clients, a janitor with a broom attached to his leg, crazy grumpy Gigi, and the one called "Venti Contrari", always walking diagonally as if she is really knocked down by the wind, whistling on stage.

All of these people would like to return to their own old lives, but it is impossible to turn the clock back and they have to build everything again. Though the winds blow in faces of all the characters, the strength of each of them is so stubborn and opposite to the direction of the wind.

"Venti Contrari" from the company Is Mascareddas is a masterpiece. It is the peak of Italian puppet theatre. It's hard to find something like that for mind, theatrical concepts, ability to remember, the beauty of form and depth of thought. <...>

Sardinia, where Donatella Pau and Tonino Murru of Is Mascareddas were born and work, has no tradition of dolls and puppets. Two artists looked for roots and possible hints of this tradition on their earth and in search have discovered sisters Giuseppina and Albina Coroneo, the creators of the dolls from fabric. Artists found them to recreate the story in a subtle lyricism, woven from expectations and devastation”

Karin Koller is a theatre director from Austria. He studied at the Max Reinhardt Seminar School of Drama at the University of Music and Performing Arts in Vienna. She worked as an assistant director at theatres in Vienna, Paris (Odeon), Marseille (National Theatre La Criée). Since 1990 works as an independent director.

In company Is Mascareddas she staged "Chi ha paura della mortadella", "Giacomina e il popolo di legno", "A regime di brezza”, “Vetri contrari”. She also staged performances in her own company Proscenion in Vienna as well as in the Schauspielhaus of Salzburg, National Theater of Mannheim, Staatstheater Braunschweig, Theater Regensburg.

Is Mascareddas was founded by Antonio Murru and Donatella Pau in 1980. The company has become an important cultural phenomenon, greatly influenced the spread of the tradition of puppet theatre in Sardinia, unknown in this Mediterranean island before. The company’s basic idea is that the puppet theatre is significant as much as the theatre in which the actors play.

The Company created 32 shows, following at first the traditional Puppet Animation Theatre and lately experimented new types of Animation technique. The most famous shows are: “La Giara” (1985) based on Pirandello’s short story, “Una notte in Tunisia” (1987) about the story of jazz music, “La Cuccagna” (1987) a musical variety, “Rebecca. Le avventure di una gallina” (2000). In early 90s Antonio Murru and Donatella Pau invented a character called Areste Paganos, and created a trilogy based on the adventures of this Sardinian Puppet: “Areste Paganos e la farina del diavolo”, about feud, “Areste Paganos e I giganti”, about Sardinian bad news, “Areste Paganos e lo strano caso del paese di Trastullas”, about banditry. In 2007 the Company debuts with “Giacomina e il popolo di legno”, a show with 66 animated sculptures that is a tribute to Eugenio Tavolara and Tosino Anfossi. In 2009 the company created two shows for adults: “Le Mosche” based on the William Golding’s novel “Lord of the flies”; and “A regime di brezza”.

The play “Anima e coru” (2011), written in occasion of Is Mascareddas thirty-year anniversary, is a tribute to the traditional Italian Puppet Theatre and its extraordinary communication potential. In 2015 two new performances were produced: “Soglie” taken from the “La via del Pepe” by Massimo Carlotto; and “La donnina che semina il grano”. 2016 other two productions: “A&C – Anima e Cuore”; and “Eppur si Muove”.

The premiere took place in 2016