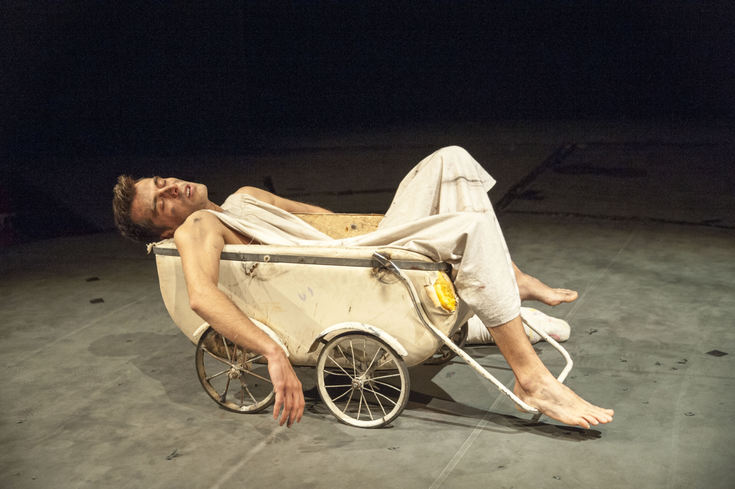 For the first time in Russia!
Duration: 50 min without intermission
Public: 18+

Seven-year-old Semyon helps a pregnant mother with the housework and looking after the younger brothers and sisters. During childbirth, the woman dies, and Semyon, realizing that the newborn will not survive without a mother, decides to devote his own life to this child. This is a story about caring, selflessness, suffering, love and desire to live in the name of another, new life.

The performance participated in the AD ASTRA Monodrama Festival in Varna.

“A story told by 7-year-old Semen literally grabs the audience by the throat and makes you feel 100% the tragedy of a man thrown to the bottom of society. Director Ivailo Gandev masterfully increases the dramatic tension from the exposition to the climax so that the audience emotionally gets closer to the unhappy fate of the child deserving with his pain the status as a saint, an angel.

Ivailo Gandev was born in Sliven, in 2001 graduated from the National Academy for Theatre and Film Arts in Sofia, specialization "Actor". There was his first directorial debut in 2005: he produced the "Smell of honey" by Aziz Nesin in Nazim Hikmet Drama Theatre in the city of Razgrad.

In 2017 he graduated National Academy for Theatre and Film Arts in Sofia, specialization "Director". "Semyon" is his graduation work at the course of Professor Plamen Markov.

Drama Theatre Stefan Kirov is a professional state theatre, established in 1918. A new building with big and small stages was built in 1986.

During a mayor of Sliven visit to Voronezh in 1995 between these cities was signed an agreement about twinning relations. Since that time there is a regular exchange of official and business delegations.