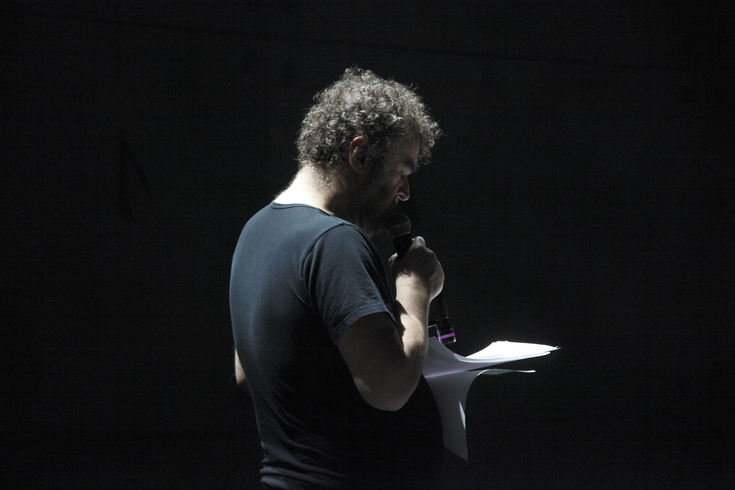 “Tales of June” – a solo performance without any scenery. A natural storyteller Pippo Delbono narrate his tale of life together with the words of Pasolini, Shakespeare, Rimbaud, Genet. It turned out a sincere confession involving themes forbidden for many people.

It is an anthem to the theatre, a confirmation of actor’s psychological ambivalence: Delbono shows high proof of actor and bare truth at the same time. The performance participated in Avignon Festival, Theatre festival in Tbilisi, and was represented in Great Britain, Spain, Japan, in the countries of Latin America and East Europe.

"Tales of June" – solo performance, where reigns Pippo himself – actor, author, and character. Born in June, he talks about his family, about pain and death. Filling the hall with the energy of his personal presence, breaking down barriers, telling anecdotes about priests and presidents, sending kisses to his dead mother, with jokes about Berlusconi and football, he gets closer to his main story – liaisons between love and guilt. And with it – to the connection of his personal story with the theatre event. <...> Played without any "Stanislavsky system" feelings and desires transformed into a magical theatre. Past, turned to the mask, to the symbolic gesture, converted our lives into myth".

“In his very popular performances which have a conversation with everyone, Pippo Delbono knows how to hurt the heart. He also knows how to make laugh boldly at absurd things happening in our lives. He himself seeks to create the theatre of chaos, the theatre which is fixed neither on mastery nor on refined beauty. It would be death for him. And he himself, Pippo, survived all losses and all diseases, enforces the death to back off”.

“What is truly beautiful in this moment is a confessional whisper and fits of poetic rage. Pippo Delbono overcomes the boundaries of the tale’s words. He bathes in a language which sometimes roars silently, sometimes violently explodes”.

Pippo Delbono – famous Italian theatre and film Director, laureate of the highest theatrical award "Europe Theatre Prize" in the nomination "New Theatre Reality", several times nominated for the award "Golden Leopard" of Locarno Film Festival. He has devoted many years to the study of Oriental theatre (India and China), worked in the Pina Bausch Theatre. In 1986 he founded his own company – Pippo Delbono Company, whose some members are people with specific health conditions. His performances regularly participate in Avignon and other theatre festivals.

Usually, the audience waits for an epatage from Pippo Delbono, who earned a reputation as a disturber of the theatre’s peace, but "Tales of June" became the exception to the rule. This is a poetic performance about the life of a man with an unusual destiny.

Duration: 1 hours and a 15 min without an intermission
Public: 18+