Based on the play by Alexander Ostrovsky “Late Love”
Main program 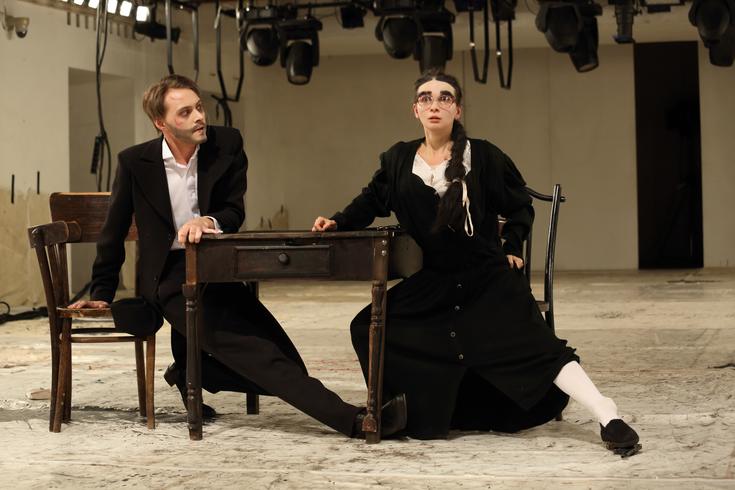 In collaboration with project “Festival “Golden Mask” in Voronezh”

Duration – 2 hours and 20 min with one intermission
Public 18+

The performance was staged jointly with GITIS.

Dmitriy Krymov staged almost forgotten Ostrovsky play without any archaic costumes or decorations. Black and white world of a hick town is populated by characters who would strangle for a penny without a moment of hesitation. And so unexpectedly love emerges at this bed of society. “Oh. Late love” is a grotesque tragi-comedy with an absurd change of clothes and impressive fights, which shows the world where people feelings “mutate” and love as “a butterfly that has flown in a mine”.

The performance is laureate of the “The Golden Mask Festival” – 2016 for “Drama/Best Small Scale Production” and “Best Actress” (Maria Smolnikova).

“Even though Ostrovsky hasn’t lost a letter, came out eccentric as clownade and exaggerated as raree show”

“Krymov follows both the experience of his time and the author experience. A strong psychologism of Ostrovsky shifts to the carnival, pathetics to grotesque, seriousness of everyday life to comic formalities – and paradox: emerges aggressive and modern Ostrovsky. Inside of the performance, the move of the life is sensible with its secret and play”

Dmitriy Krymov – is a famous Russian director and artist, the head of the Laboratory at “School of Dramatic Art”. The laureate of the “Golden Mask”, “Crystal Turandot” Award, Herald Angel award of the Edinburgh International Festival.

As an artist he has worked at the Theatre on Malaya Bronnaya, at the Moscow Taganka Theatre of drama and comedy, Russian Academic Youth Theater, the Stanislavsky Drama Theatre, the Gogol Theatre, the Ermolova Theatre, The Mossovet Theatre, The Mayakovsky Theater and others. He has worked with such directors as Anatoly Efros, Vladimir Portnov, Georgy Tovstonogov, Valerie Sarkisoff, Yevgeny Aryeh, Adolf Shapiro, Mark Rozovsky, Sergei Artsibashev and others.

At the beginning of 90th Dmitriy Krymov leaves theatre and goes into easel art: painting, graphics, installation. Participated at numerous personal and group exhibitions in Russia and abroad.

Since 2002 Dmitriy Krymov holds classes of theatre arts at GITIS.

In 2004 the story of Dmitriy Krymov Laboratory has begun. The Laboratory actively tours around the world and its performances were successfully accepted by the Brazilian, USA, Australian, New Zealand, British and European audience. The performances take part at prestigious international festivals and have been repeatedly distinguished with honorary awards. The Dmitriy Krymov Laboratory is a multiple the “Golden Mask” award winner (performances “Demon, Seen from Above”, “Opus No 7”, “Tararabumbia”, “Oh. Late love”).

Theater “School of Dramatic Art” was founded in 1987 by the extraordinary theatre director, educator and theatre theorist Anatoly Vasiliev. The concept of Anatoly Vasiliev theatre was based on a model “Laboratory – School – Theatre” which approves the importance of theatrics comprehensive nature research.

The “School of Dramatic Art” is a theatre that carries on today a tradition of experiment. The repertory presents performances of the three creative Laboratories of Dmitriy Krymov, Alexander Ogarev and Igor Yatsko. Each Laboratory has its esthetics and theatre language.

Duration – 2 hours and 20 min with one intermission
Public 18+

The performance was staged jointly with GITIS.