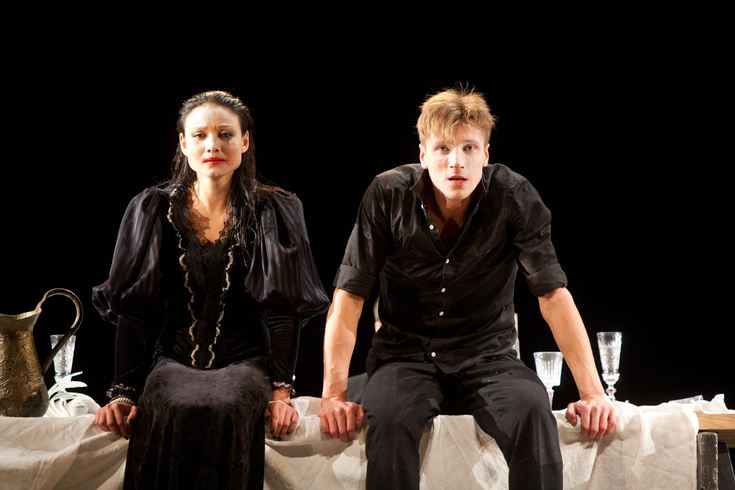 In collaboration with project “Festival “Golden Mask” in Voronezh”

Yuriy Butusov destroys the narrative of Shakespeare's play, mounting the scenes at its own discretion, dilating and constricting stage time. The composition is built on a dream logic, the director’s purpose is not continuous telling of the story but searching the essence of the play and its emotional core.

“A modern performance, not at the level of newspaper language, but at the level of an all-destroying rhythm. A remarkable document about the beat of modern life, this cold madness, this violent schizophrenia, about the world, obsessed by the endless rap.”

“The main thing here is not the plot of the crime and the struggle for power but the characters’ reflection, which is the punishment for a crime. It is not a coincidence that in one scene lady Macbeth is surrounded by many mirrors. A tragedy turns into a repetitive, phantasmagoric nightmare.”

Yuriy Butusov – one of the most famous and renowned directors of modern Russia, artistic director of the Lensoviet Theatre, laureate of the “Golden Mask”, “Golden soffit”, “The Seagull”, “Crystal Turandot”.

In the Lensoviet Theatre he staged the play “Woyzeck” by G. Buchner, “Waiting for Godot” by S. Beckett, “Caligula” by A. Camus, “The Bedbug” by Vladimir Mayakovski, “The Thief” by V. Mysliwski, “Eldest son” by A. Vampilov, “Liebe. Schiller”, “We are all good people” by I. Turgenev, “City. Marriage. Gogol”, “Cabaret Brecht”, “Shakespeare’s Room”, “Three sisters” and “Uncle Vanya” by A. Chekhov, “Dream of autumn” Yu. Fosse, “Hamlet” by William Shakespeare and others. Butusov staged performances at the Alexandrinski Theatre, in “Satiricon” Theatre, in Oleg Tabakov Theatre, in Moscow Art Theatre A. P. Chekhov, in Theatre. E. Vakhtangov, in Theatre. A. S. Pushkin, as well as in South Korea, Poland, Norway, Denmark and Bulgaria.

The St. Petersburg Lensoviet Academic Theatre is one of the most famous theatres in Russia. Founded by Isaac Kroll, a Meyerhold disciple, in 1933 in Leningrad under the name New Theatre. The troupe moved into the current building in 1945. In various years the theatre was headed by Boris Sushkevich, Nikolay Akimov, Igor Vladimirov, Vladislav Pazi. Yuriy Butusov is the Сhief Director since 2011 and the Theatre's Artistic Director since 2017.