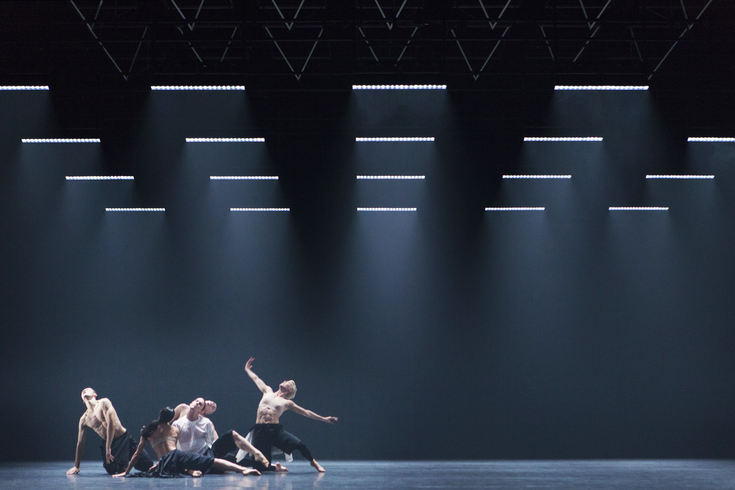 The festival Closing
Duration: 1 hour 20 minutes with no intermission
Public: 12+

The premiere took place on the 4th of October 2017

What does it mean to write your own life-story? For twenty-five years, Wayne McGregor has been making choreography that interrogates life through the experience of the body, moving intelligently in space and time. His practice has been far-reaching and sought out collaborators from a diverse range of artistic and scientific fields to investigate the nature of embodied cognition.

Now McGregor turns his attention to the body as archive, as he embarks on a cycle of choreographic portraits illuminated by the sequencing of his own genome. The first of these studies, Autobiography, is an abstract meditation on aspects of self, life, writing, refracting both remembered pasts and speculative futures.

Palimpsesting McGregor’s choreographic imprint over personal memoir and genetic code in a continuous re-imagining, Autobiography unfolds uniquely for each and every performance. Life, writing itself anew.

‘Wayne McGregor turns his life story into dance in a mesmerising, inimitable show based upon his own genetic code’

‘McGregor’s choreographic language retains its trademark reliance on athleticism, speed and continual, sometimes frenzied, movement by exceptionally flexible bodies; but it appears to have matured and become mellower, more reflexive, less reliant on hyper-extensions and more on the relationships between dancers. <…> It is Wayne McGregor at his best‘

Wayne McGregor CBE is a multi award-winning choreographer and director. He is Resident Choreographer of The Royal Ballet, Covent Garden, London. He is also regularly commissioned by and has works in the repertories of the most important ballet companies in the world, including Paris Opera Ballet, New York City Ballet, Bolshoi Ballet, Royal Danish Ballet and San Francisco Ballet/

McGregor is the recipient of many prestigious awards including two Olivier Awards, the Prix Benois de la Danse, four Critics' Circle National Dance Awards, two Time Out Awards for the Outstanding Achievement in Dance, an IMZ Dance Screen Award, and in 2011 was awarded a CBE for Services to Dance.

McGregor is internationally renowned for trailblazing innovations in performance that have radically redefined dance in the modern era. Driven by an insatiable curiosity about movement and its creative potentials, his experiments have led him into collaborative dialogue with an array of artistic forms, scientific disciplines, and technological interventions. The startling and multi-dimensional works resulting from these interactions have ensured McGregor’s position at the cutting edge of contemporary arts for over two decades.

He has choreographed for theatre, opera, film (Harry Potter and the Goblet of Fire, The Legend of Tarzan, Fantastic Beasts and Where To Find Them, Sing), music videos (Radiohead, Thom Yorke, The Chemical Brothers), and fashion (Gareth Pugh at London Fashion Week 2017, NY Fashion Week 2014). In 2017 Studio Wayne McGregor opened its own creative arts studios on Queen Elizabeth Olympic Park, the new home for Company Wayne McGregor and a share space for making and collaboration across the arts, science, technology and academic research.

Music by Jlin in partnership with Unsound.

The premiere took place on the 4th of October 2017