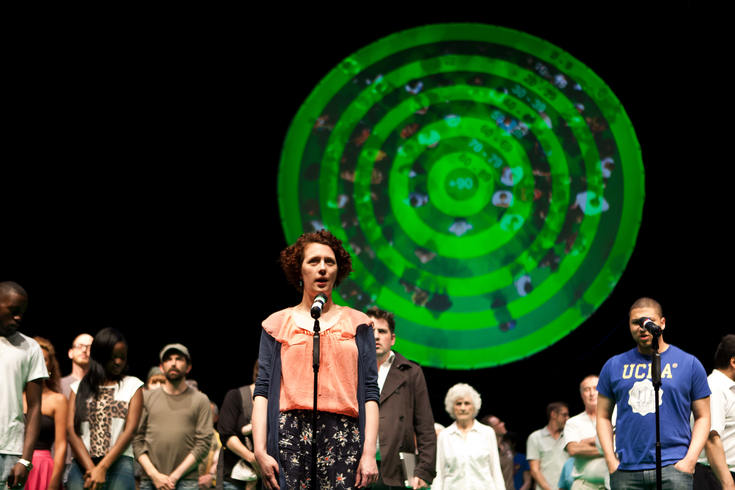 For the first time in Russia!
The premiere will be held at the VIII Platonov Arts festival

“100% Voronezh”is a documentary stage production based on statistical data and performed by real residents of the city. The Rimini Protokoll underline that they transfer life reality to the stage without help of intermediaries – actors. For the performance patisipation100 people are cast in a way to reflect statistical diversity of Voronezh. And then they speak up on behalf of the whole city on various topics and answer problematic questions.

The first “100% City” was Berlin in 2008, the last one – Canadian Montreal. The project was staged in London, Paris, Marseille, Vienna, Cologne, Dresden, Copenhagen, Amsterdam, Riga, Tokyo, Philadelphia, São Paulo, Melbourne and other cities. There are about 30 of them. The idea is to create absolutely new performance in each city at the same time based on the hard framework of the Rimini Protokoll concept.

“100% Voronezh” will be a premiere of this unique project in Russia.

Rimini Protokoll is the most famous European company working in the realm of documentary theatre. The group was founded in 2000 in Berlin by three directors who graduated from the famous Giessen University in Hessen: Stefan Kaegi, Helgard Haug, and Daniel Wetzel.

Rimini Protokoll is the winner of prestigious awards, including German National theatre award the Faust Theatre Prize, the European Prize New Theatrical Realities for creative discoveries and the silver lion of the Biennale for Performing Arts in Venice.

Their mostly famous promenade-projects in Russia are “Remote Petersburg” and “Remote Moscow”, performance-voyage “Cargo Moscow”, as well as “Home Visit Europe”, nominated for the Golden Mask in 2018, and other works.

The premiere will be held at the VIII Platonov Arts festival