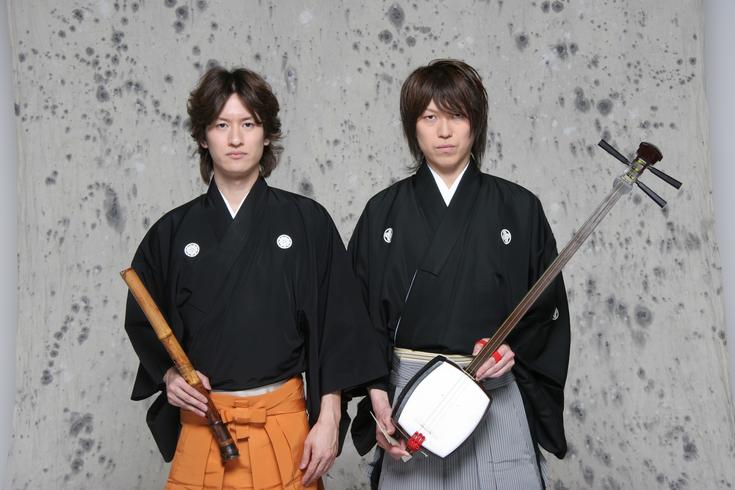 The name of the group is derived from the matching-sounding characters of the first names of its participants, who represent the basic structure:

The ensemble HIDE-HIDE which can be called a unique phenomenon in the musical life of Japan, debuted in 2007 with successful production of “NEO Japanesque” solo CD, released by Sony Music Direct and composed of traditional Japanese music and original compositions in audacious and modern arrangements. In the same period a young group of promising artists traveled with triumphant tour to 62 cities in Japan, giving a total of more than 170 performances at various concert places.

The group has a vast concert repertoire of compositions which is of interest to the diverse music audiences, and especially for those who appreciate the charm of live sound of acoustic folk instruments.

Young artists claim themselves to be the founders of a new musical trend they have named   HYPER-TRAD-MUSIC, what means by them the concept of everlasting national tradition, continuing its evolution and development in the present day.

As followers of the famous Japanese masters, young musicians embody in their performing the best features of age-old traditions of Japanese music with a rare talent and professionalism of presenting them to modern listeners.

Despite their youth, both musicians themselves already have a qualification that allows them to engage in teaching. In 2010, the shakuhachi player Hideki Ishigaki was awarded first prize at the prestigious contest of traditional Japanese music.

Breath of fresh air in their work the musicians have acquired in 2009 when musicians first got acquainted with Russia by making the original album of arrangements of composer Michael Tariverdiev music.  Fine and elegant melodies sound of this famous Russian film music composer shows new sides of unique attractiveness and expressiveness in the performance of traditional Japanese instruments.

In March 2010, the group in the membership of Hideki Ishigaki, Hideki Onoue and composer-pianist Kamimura Shuhei attended the First International Music Tournament TEREM CROSSOVER, which was held in St. Petersburg, and took the First prize there performing a variation on the theme of the work "Sarabande" by Handel and “The little prince” by Mikael Tariverdiev, arranged for shamisen, shakuhachi and piano.

In the beginning of April 2011, the HIDE-HIDE first Russia concert tour took place. It was organized under the patronage of St. Petersburg  “Terem Quartet” music agency by the Concert Organizations Union of Russia, as a special prize to the winners of the First International Music Tournament TEREM CROSSOVER. Its geography included eight cities: Veliky Novgorod, St. Petersburg, Vologda, Kostroma, Moscow, Khanty-Mansiysk, Tyumen and Ekaterinburg and  the concerts audience totaled more than four thousand people.

It was sold more than 800 CD-albums during the tour, and on the initiative of musicians the sale profit of the albums was held to the Foundation for Support of victims of the March earthquake and tsunami in Japan.

In June 2012 the musicians took part in The All European Radio Union folk Festival in Segovia and had rather big success.

In the period of 20120 -2012 they also had good concerts tours in France, Italy and some other countries.

Since 2008 he group has being produced by TOEI MUSIC PUBLISHING company (Japan).