"The Last Bastion" is an amusing play, where the audience are shot at with a catapult. The characters build barricades, attempt to desert, throw up the white flag… And fight again for their fragile painted stronghold – the Last Bastion.

This is a story about a gilded Pieretta hiding an "adrenalin-amped" hooligan inside. The provocative play explores the issues of hidden aggression and imaginary boundaries, its message is simple and clear – in order to preserve the Last Bastion, instead of fighting external enemies, one has to resolve internal problems.

Mr Pejo's Wandering Dolls is a theatre of carnival culture, mask, grotesque and buffoonery founded in 1993.

"Mr Pejo's Wandering Dolls from St-Petersburg - is not just a usual clown troupe, that entertain the audience on the markets. This is a unique street theatre company, that dates back to the traditions of Renaissance and Baroque, Carnival of Venice,and even a Russian ballet...Their performances are very grotesque. The actors untiringly provoce the audience for the interaction and improvisation. Although the pain and anguish often hides under the mask of laghter, the good always wins the evil." 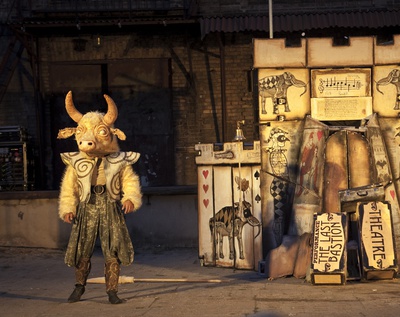