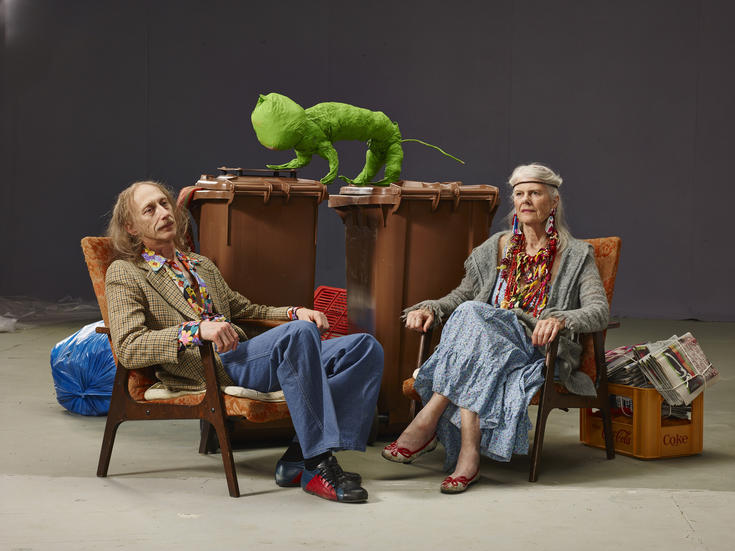 In collaboration with the Multimedia Art Museum, Moscow and the gallery "Triumph"
The exhibition is open from June 2 to 14, 2016 Art centre "Commune" (Prospekt Revolutsii, 39 B)
Free entry

Inverso Mundus is a video installation of the group AES+F, in which the artists referring to the late Middle Ages and Renaissance transmit the idea of the "World Inside Out" to the XXI century.

The inverted world is a popular theme used in the European Art of the transition period that appeared due to the destruction of the medieval system of values under the weight of the new knowledge of the world order. Folk art (folklore and lubok, in particular) reacted to these changes with acidulous satire laughing at the union of what cannot be united. Great painters also referred to this theme: motives of the "inverted world" can be traced in the works by Hieronymus Bosch, Pieter Bruegel the Elder and Francisco Goya.

Old engravings in the genre of "World Upside Down" (The World Upside-down, El Mundo al Revés, Le Monde Renversé, and other translations in different languages) depict such scenes as a pig gutting the butcher, a child punishing his teacher, a man carrying a donkey on his back, man and woman exchanging roles and dress, a beggar in rags magnanimously bestowing alms on a rich man, demons, chimeras, fish flying through the sky and death itself, variously with a scythe or in the mask of a plague doctor.Mundus– the Latin "world" and Inverso – is both an Italian "reverse, the opposite" and the Old Italian "poetry," which alludes to the art processing.

In the interpretation of the art group AES+F absurd stories of bygone eras take place in the modern everyday life and the history repeats itself: the world is being transformed again and the established values are again questioned. Characters act out scenes of social utopias and exchange masks, morphing from beggars to rich men, from policemen to thieves. Metrosexual street-cleaners are showering the city with rubbish. Female inquisitors torture men on IKEA-style structures. Children and seniors are fighting in mixed martial arts matches. "Inverso Mundus" is a world where chimeras are pets and the Apocalypse is a form of entertainment.

The video installation "Inverso Mundus" was shown for the first time in the parallel program of the 56th Venice Biennale  in May in 2015 (the works of the art group AES+F had been shown in Venice for a great number of times before it). The project was shown in Russia for the first time in the program of the 6th Moscow Biennale of contemporary art.

Watch the trailer of the video installation "Inverso Mundus"

The project is created with the support of the fund FAENA ART and Blavatnik Family Foundation.

The art group AES+F, is popular among contemporary art lovers throughout the world. The group consists of  such artists as Tatiana Arzamasova, Lev Evzovich,  Evgeny Svyatsky and Vladimir Fridkes. They use in their works photography, video and new technologies as well as other traditional media such as painting and sculpture. AES+F explores the values and conflicts of the modern global culture in its works.

The art group AES+F was founded in 1987 by Arzamasova, Evzovich and Svyatsky. Fridkes joined the group in 1995, at which point the group was renamed to AES+F. The expositions of the group took place in Australia, Austria, Argentina, Belgium, Great Britain, Venezuela, Germany, Spain, Italy, Canada, Cuba, China, the Netherlands, New Zealand, Norway, Serbia, the USA, Finland, France, Switzerland, Sweden, South Korea, Japan and other countries.

Multimedia Art Museum, Moscow/ Moscow House of Photography is an expo centre, the first museum in Russia that specializes in photography and video and media art. It was founded in 1996.  The exhibitions of such photographers as Alexander Rodchenko, George Petrusov, Henri Cartier-Bresson, Annie Leibovitz and others took place in the museum.

The gallery "Triumph" was founded in 2006 and it focuses on contemporary art. Among well-known Russian artists with whom the gallery works are AES+F, Alexander Vinogradov, Vladimir Dubossarsky, Alexei Beliayev-Guintovt and Recycle Group. The gallery showed the works of Damien Hirst  and Jake and Dinos Chapman for the first time in Moscow.