The Practices of Growing Up. Alexander Shishkin-Hokusai 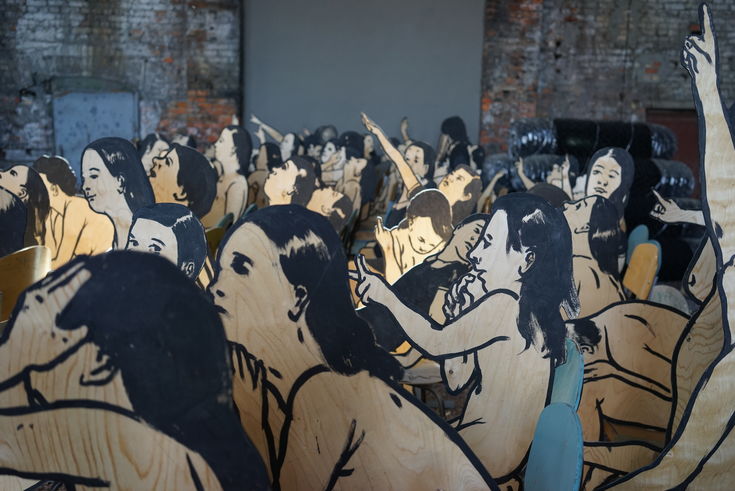 The art centre "Commune" will host a large installation of Alexander Shishkin-Hokusui "The Practices of Growing Up". It consists of multiple plywood figures, hand-made and hand-painted by the artist. Depending on the characteristics of a building and light, the installation is adapted to a new stage.  The installation was shown for the first time at the exposition "Remember Tomorrow" in the Stree-Art Museum in St. Petersburg in 2015. The installation visited Ufa and is now  coming to Voronezh.

The installation shows knowledge transfer as a ritual - a lesson looks like a mass. Shishkin-Hokusai thinks that growing up amounts to becoming a part of absurd and repressive system of social relationships, which is shown in culture by such institutes of upbringing and education as church and school.

The artist uses a pseudonym when he works outside the theatre. Alexander Shishkin-Hokusui is a painter. He creates installations and performances where, like in the theatre, he artfully fills up any space.   He has gained nomination for Kandinsky Award. His expositions have taken place in Russia, Ireland, France, Finland and other countries.

Hokusai is a pseudonym taken from a great Japanese artist: ".... I play around my surname. Shishkin worked with nature. I added an antagonist Shishkin-Hokusai to the surname. Hokusai worked with characters, figurative plastic arts, even actors in some way. I have chosen two vectors for myself: Shshkin accounts for an environmental aspect and Hokusai stands for a psychodrama, work with homo sapiens", - the artist says in one of his interviews.