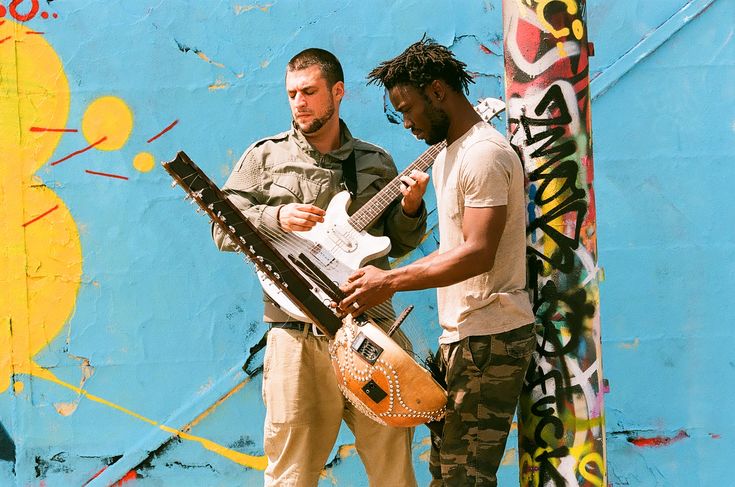 An exotic duet of a rapper from New York and a virtuoso kora player from Guinea has toured the world in the past couple of years. Sekou Kouyate and Joe Driscoll blend hip-hop, funk, Afrobeat and reggae; they won the hearts of both the music critics and the public of at least 30 international festivals.

Sekou Kouyate, already a phenomenon in African music circles, has blown minds and ears with his hypersonic electrified riffs on the kora, bringing the exalted West African harp into the XXI century with use of distortion peddles, effects and previously-unimagined technical prowess. In France, where Sekou lives now, he is known as the ‘Jimi Hendrix of the kora’ because of his unique style of playing with various effects, in a variety of genres, and with an extreme intensity.

Sekou was raised in a musical family in Conakry (the capital city of Guinea). He sings in the indigenous Susu language. Even before his meeting with Joe Driscoll, Sekou Kouyate was quite a well-known musician touring the world as a member of the Ba Cissoko band.

Joe Driscoll is a popular American rapper performing a fusion of hip-hop, beatbox, reggae and folk. His colleague and a multiple Grammy laureate Cee-Lo Green has labelled the musician “the gangsta with an iron lung” for his glibly intoned patter.

Joe Driscoll has toured all over North America and Europe and performed at the world’s major music festivals, including Glastonbury (Great Britain).

Joe Driscoll and Sekou Kouyate first met at a music festival in France in 2010. Sekou does not speak English, nor does Joe speak French, but music helped them find a common language. “We’ve been raised in very different cultures in so many ways, but we share a lot of the same interests musically, – says Joe, - we listen to each other, and try to flow in harmony.”

Their debut album Faya, released in 2012, made it to the top ten world music albums on iTunes. The duet has participated in such festivals as WOMAD, Secret Garden Party, Greenman Festival and over 30 other music forums in Great Britain, France, Germany, the Netherlands, Switzerland, Austria and Canada besides giving a series of concerts in India and Africa.

The duet received the 2015 Transatlantic Bridge Prize (Canada). They were nominated for the Best Cross-Cultural Collaboration award from Songlines magazine, and their track ‘Lady’ was selected for the Songlines compilation album which sat at the top of the Amazon world music charts for a long while. The White Well audience will hear some of the tracks from their new album Monistic Theory.