The Deceitful Crocodile / Dido and Aeneas

after Henry Purcell's opera and other materials
Main program 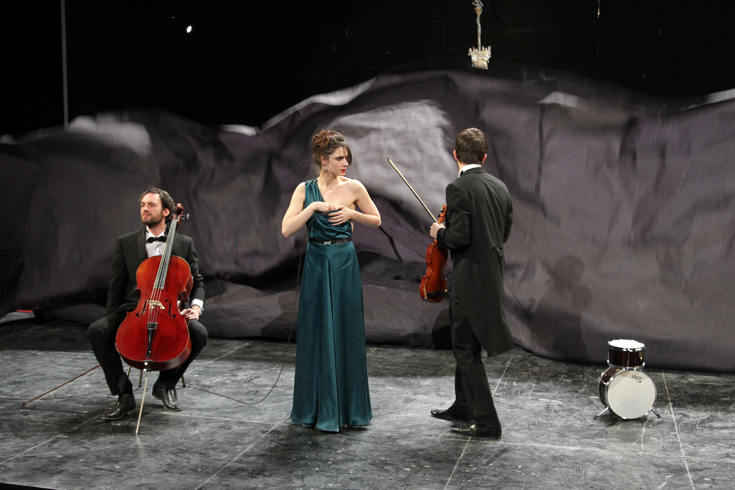 Other dates and times
Opera and Ballet Theatre

The directors of the performance are trying to question the outstanding baroque opera by Henry Purcell. Musical foundation in a new production becomes a play of jazz musicians, while actors move from opera singing to dramatic dialogues and improvisation.

Under question are both music and performance mentioned in the original opera - acting/singing posture, relation to the space, musical transpositions and reformulations, relation to a convention, the approach of tragedy, rewriting of a myth and its themes: love, leave, devour, grieve to death.

"The Deceitful Crocodile" has been awarded by the Molière Academy as Best Music Theatre performance of the year.

Théâtre des Bouffes du Nord was founded in 1876. It received worldwide fame thanks to the director Peter Brook, who worked there from 1976 to 2008 and put on the stage his greatest performances. Today, the theater is under the direction of Olivier Mantei and Olivier Poubelle.

Samuel Achache is a young and already well-known actor and director. "The Deceitful Crocodile / Dido and Aeneas" is the first work under his direction. Achache's second stage production "Fugue" was included in the main program of the Festival d'Avignon in 2015.

Jeanne Candel is a dancer, choreographer, director, and actress. The director of several productions, including an evening dedicated to Pina Bausch, in the Théâtre de Vanves.

"... All members of the cast, well-known for their skills of improvisation, uplift and transform Purcell’s baroque score into jazz energy and manage to find the fine balance where music becomes action"

"We laugh as much as we are moved!"

"Glorious and exhilarating youth of this team that excels in everything!"