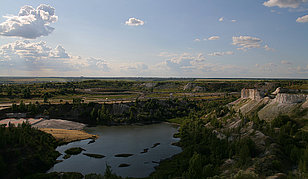 World Music in White Well Quarry open-air is a project, successfully launched within Platonov festival previous year’s edition. The music marathon set against the backdrop of a picturesque lake brought to the chalk quarry (which has now been dubbed “Voronezh Grand Canyon”) about two and a half thousand spectators. The people who visited White Well in 2015 made a number of musical discoveries, the coming open-air promises even more Russian premieres.

We are going to enjoy the performances of new and ultra-new stars of the world independent music stage, those who have conquered most major international festivals and yet have not become a part of mainstream culture hyped by the Russian popular radio stations. World Music in White Well is an essence of current folk striving for a modern rendition, a mixture of genres and styles, giving a rise to something new out of fusion of seemingly incompatible elements. 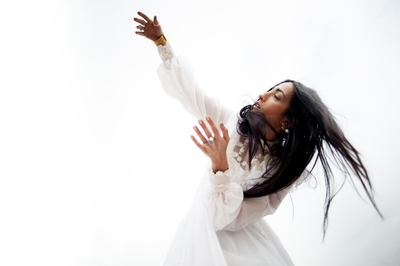 Hindi Zahra is a Moroccan folk, jazz and blues singer living in France. She is one of the most well-known singers on the contemporary European stage.

Hindi Zahra made her radio debut in 2005 as a vocalist of Oursoul band. Her first solo EP came out in 2009. A year later, she recorded Handmade album, which shot to the top of World Music charts in Europe and was awarded a prestigious Victoires de la Musique prize as the Best World Music Album and Prix Constantin (a springboard for young budding singers) as the Best Album. Handmade brought the singer international acclaim: Hindi Zahra toured the 5 continents and gave over 400 concerts.

Today Hindi Zahra is one of the more renowned singers in Europe. Her new, hotly-anticipated album Homeland (2015) received favorable reviews and was nominated for the Victoires de la Musique award. Hindi Zahra’s first concert in Russia in support of the new album will take place in the White Well Quarry within Platonov Arts Festival.

Homeland album, as is obvious from the name, was inspired by Zahra’s motherland – Morocco. The country is situated on the crossroads between Africa and Europe, it is a focal point where India, the Middle East, Africa and Asia, the desert, the mountains and the ocean, the hot and the cold all converge. This is what Hindi Zahra’s songs are like – they are not confined to one style, they intertwine the Berber and Egyptian music with soulful jazz, eastern blues and even Brazillian Bossa Nova. Her music is unpredictable, graceful, mysterious and tender.

Hindi Zahra mostly writes her songs in English, though her repertoire features compositions in Berber and French. Her voice is often compared to those of legendary Billie Holiday, Patty Smyth, Norah Jones and the Portished vocalist Beth Gibbons.

Hindi Zahra is a frequent guest of international music festivals, such as the International Jazz Festival in Montreal (Canada), Nice Jazz Festival (France), Oslo World Music Festival (Norway), Nour Festival of Arts in London (Great Britain), Festival des Libertés in Brussels (Belgium), Gnaoua Music Festival (Morocco), Torino Jazz Festival (Italy) and others. In 2012 within Days of Francophonie, she performed in Moscow and St. Petersburg, and now, at long last, the singer is coming to Voronezh. 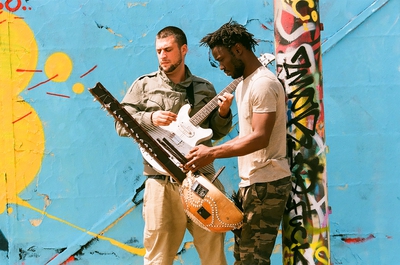 An exotic duet of a rapper from New York and a virtuoso kora player from Guinea has toured the world in the past couple of years. Sekou Kouyate and Joe Driscoll blend hip-hop, funk, Afrobeat and reggae; they won the hearts of both the music critics and the public of at least 30 international festivals.

Sekou Kouyate, already a phenomenon in African music circles, has blown minds and ears with his hypersonic electrified riffs on the kora, bringing the exalted West African harp into the XXI century with use of distortion peddles, effects and previously-unimagined technical prowess. In France, where Sekou lives now, he is known as the ‘Jimi Hendrix of the kora’ because of his unique style of playing with various effects, in a variety of genres, and with an extreme intensity.

Sekou was raised in a musical family in Conakry (the capital city of Guinea.) Trained in the ancient traditions of his instrument, it is his ability to transcend and build upon those traditions that has set him apart. He sings in the indigenous Susu language. Even before his meeting with Joe Driscoll, Sekou Kouyate was quite a well-known musician touring the world as a member of the Ba Cissoko band.

Joe Driscoll is a popular American rapper performing a fusion of hip-hop, beatbox, reggae and folk. His colleague and a multiple Grammy laureate Cee-Lo Green has labelled the musician “the gangsta with an iron lung” for his glibly intoned patter.

Joe Driscoll has toured all over North America and Europe and performed at the world’s major music festivals, including Glastonbury (Great Britain).

Joe Driscoll and Sekou Kouyate first met at a music festival in France in 2010. Sekou does not speak English, nor does Joe speak French, but music helped them find a common language. “We’ve been raised in very different cultures in so many ways, but we share a lot of the same interests musically, – says Joe, - we listen to each other, and try to flow in harmony. I think we just bounce off each other in so many ways: rhythmically, melodically, with craftsmanship.”

Their debut album Faya, released in 2012, made it to the top ten world music albums on iTunes. The duet has participated in such festivals as WOMAD, Secret Garden Party, Greenman Festival and over 30 other music forums in Great Britain, France, Germany, the Netherlands, Switzerland, Austria and Canada besides giving a series of concerts in India and Africa.

The duet has stirred interest among radio stations, having their live performances broadcast on  BBC World Radio, The Strand (Great Britain), Radio Nova (France), 3FM (the Netherlands), Funkhaus Europa (Germany), as well as on the British television channel BBC World News TV. They were nominated for the Best Cross-Cultural Collaboration award from Songlines magazine, and their track ‘Lady’ was selected for the Songlines compilation album which sat at the top of the Amazon world music charts for a long while. The duet received the 2015 Transatlantic Bridge Prize (Canada).

May 2016 will see the release of their new album Monistic Theory. The White Well audience will hear some of the tracks from the album. 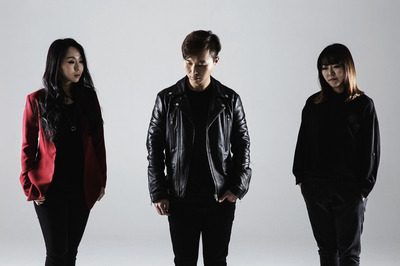 Jambinai, a band from Seoul playing post-rock with traditional Korean instruments, creates some of the most innovative sounds in East Asia’s underground scene. Considering various attempts contemporary musicians make to bring traditional Korean music into the XXI century, kormore.com portal hailed Jambinai as “the first and the best”.

The band was founded in 2010, when they released their first EP. Ilwoo Lee (a guitarist,  piri and oboe player), Bomi Kim (haegum (a cello-like instrument) player) and Eun Youg Sim (geomungo (zither) player)  used to study Korean traditional music at university and felt it needed to find a new way to present itself. That is how they came by the idea to mix meditative tunes of the past with elements of metal, and electronic music.

In 2011, the band was invited to play at the Incheon Pentaport Rock Festival, one of South Korea’s largest music festivals.  A few months later, Jambinai came in second winning the “Jury Prize” at the EBS Hello Rookie Final – an award show created to highlight South Korea’s top young bands.

In 2012, Jambinai released their debut full-length album, Différanc, which won Best Crossover Album at the 2013 Korean Music Awards and also earned the band a nomination for the Best Jazz & Crossover Performance award at the same ceremony.

Looking to build upon their success at home, the band is making their strides abroad. Jambinai are the first musicians in the history of Korea to be invited to Glastonbury (Great Britain), which is one of the most prestigious international music forums. As a quintet (plus a drummer and a bassist), they have performed at the World Village Festival (Finland), Cena Contemporanea (Brazil), WOMEX (Great Britain), Oslo World Music Festival (Norway), SXSW (the USA), Roskilde Festival (Denmark), Exit Festival (Serbia), Primavera (Spain) and Liverpool Sound City (Great Britain).

Now the band are completing their work on the new album, whose release is scheduled for the spring-summer 2016. 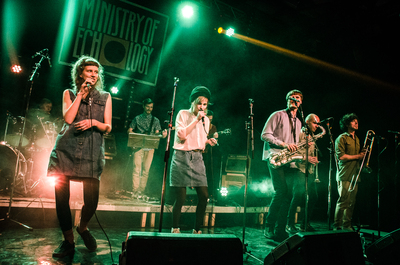 Ministry of Echology is one of the most popular young Lithuanian bands, a household reggae-dub name in the country. Actually, reggae is a rare genre on Lithuania’s stage, the country itself having little in common with sun-kissed Jamaica.  Fortunately, one advantage of the world music is that it does not necessarily have to be performed by the indigenous population of a particular region.

Summer 2013 saw the “ministers” take the floor at a number of alternative music festivals in Lithuania. The band has got 10 members – almost an orchestra with drums and percussions, guitars and horns.

Their debut album Notes & Quotes was released in 2014. Vilnius still remembers that concert, whose venue with 1000 + people capacity could not accommodate all those wishing to get inside and enjoy the young band’s performance; and the queue stretched for about 50 metres from the entrance.

After that event, Ministry of Echology gave a series of concerts in Poland, Germany and France, where they received a warm welcome from the public. Soon their remix-album Version Excursion was released.

The band’s songs can be heard in several Lithuanian films as well as on the national radio LRT and Opus radio. The band was nominated for the Lithuanian music M.A.M.A. award.

The “ministers” have recently released their new album Wanderer.