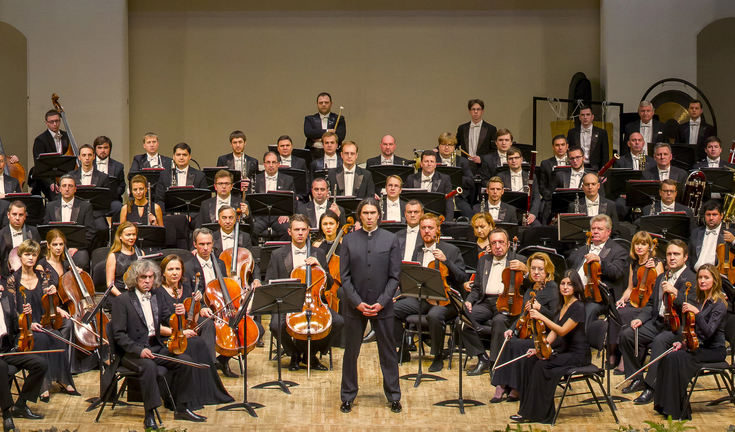 The concert programme was specially prepared by maestro Jurowski for the Platonov Arts Festival. The audience will have a rare opportunity to hear the Song from  Platonov’s Novel by a Soviet and Russian composer Alexander Wustin (born in 1943) as well as the Russian classics of Platonov’s time – the works by Igor Stravinsky and Sergey Rachmaninov.

The Russian State Symphony Orchestra has toured all over the world performing at the most famous venues, among which there is Carnegie Hall in New York, the Kennedy Center in Washington, DC, Musikverein in Vienna, the Royal Albert Hall in  London, Salle Pleyel in Paris, Teatro Colon in Buenos Aires, Suntory Hall in Tokyo and many others.

Vladimir Jurowski is the Artistic Director of the Svetlanov State Academic Symphony Orchestra of Russia, the Principal Conductor of the London Philharmonic Orchestra and one of the most renowned conductors of the world. He is a holder of numerous accolades, among which there is the Abbiati Prize for Conductor of the Year, the BBC Music Magazine Award, and a Grammy nominee.

In 1995, he made his triumphant international debut at the Wexford Opera Festival and on the stage of Covent Garden (London). Since then, Jurowski has been a guest conductor at some of the world’s major theaters, including Opéra Bastille (Paris), The Metropolitan Opera (New York), Komische Oper (Berlin), Teatro La Fenice (Venice), Teatro alla Scala (Milan), and the Bolshoi Theatre (Moscow) as well as with leading symphony orchestras such as the Vienna, Berlin, Oslo and New York Philharmonics; the Philadelphia, Chicago, Boston, and Cleveland Symphony Orchestras; the Staatskapelle Dresden, the Leipzig Gewandhaus Orchester, the Royal Concertgebouw Orchestra; the Bavarian Radio Symphony Orchestra and many others.