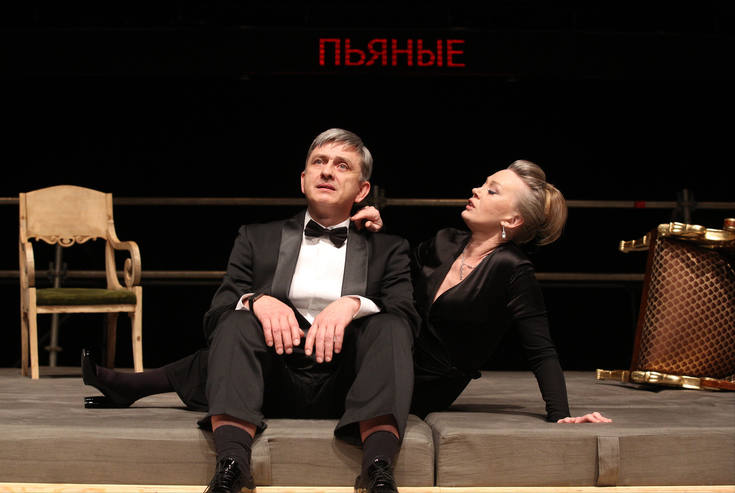 In collaboration with the project "Golden Mask" Festival in Voronezh"

"The Drunk Ones" rendered by Andrey Moguchiy is a story that tells us not to be afraid of living and loving. Ivan Vyrypaev, a playwright, has found a way to speak about the most important things in an accessible and funny way. All the characters in the play are desperately drunk and thus fearlessly sincere. Having cast the formalities away, they are passionately babbling on the most heartfelt topics — liberty, love and God. The state of inebriation in the play is not only an artistic device to ironically distance a spectator from the characters, but also an integral condition for reclaiming the once lost contact with reality.

"The Drunk Ones" is a confidential discussion with the audience about confessions we are afraid to make not only to each other but also to ourselves. The performance participates in the "Golden Mask" 2016 festival in four nominations.

Andrey Moguchiy is a theatre director, the artistic director of Tovstonogov Big Drama Theatre. He is the founder of the independent theatre group Formal Theatre, the winner of the main prize at the Edinburgh festival in 2001 and Grand Prix at the BITEF festival (for his production of "School for Fools"). He has directed over 40 plays and theatre performances.

Andrey Moguchiy is the organizer and a participant of a great number of theatre festivals. He is a multiple laureate of the "Golden Mask" and "Golden Sofit" awards (for his productions of "School for Fools", "Between Dog and Wolf", "PRO Turandot", "Ivans", "Izotov", "Happiness", "Alisa"). He is a laureate of the European New Theatre Reality award, International Stanislavsky theatre award and many others.

Tovstonogov Big Drama Theatre is one of the most renowned theatres of Russia. Maksim Gorkiy and Alexander Blok were among the founders, and Georgiy Tovstonogov was the artistic director of the theatre for over 30 years. A constellation of legendary actors graced the theatre throughout years: I. Smoktunovskiy, V. Strzhelchik, T. Doronina, Z. Sharko, E. Kopelyan, A. Freindlikh, O. Basilashvili and other artists.