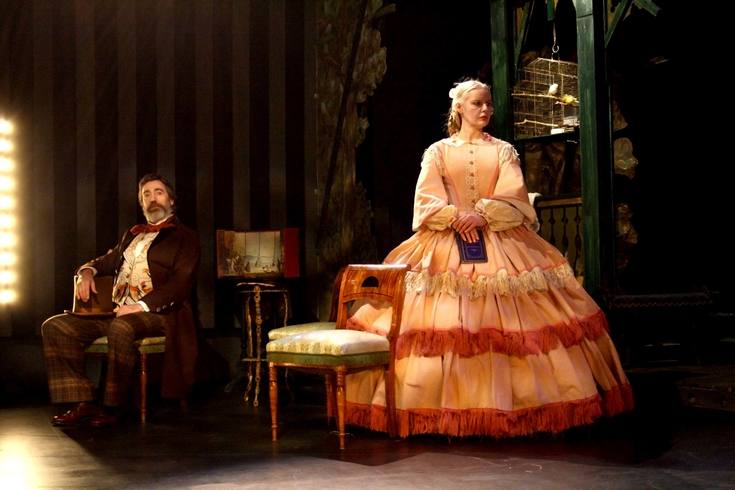 "Svanhild" is a world premiere of non-published play of Norwegian classic Henrik Ibsen. He began working on the manuscript of "Svanhild" in 1860, but it was never finished.  Some of the elements and characters from this work were later folded in to his 1862 work, “Love´s Comedy”.  The main characters - a strong and independent Svanhild, who anticipates several of Ibsen's later heroines, and romantic poet Falk - present in both versions.

Director and actors manage to recreate the picture of society of mid XIX century, and it seems as if time has stood still. And despite the fact that the play was written over 150 years ago, it remains pertinent.

Lars Øyno is a founder and artistic director of the Norwegian Grusomhetens Teater. The recipient of  "Dance and Theatre Prize" for the best performance. Not for the first time the director refers to  little-known texts of the great Norwegian playwright. His play "Mountain Bird" (2009), based on the unfinished libretto by Ibsen, still successfully tours all over the world, in Russia it was shown at the festival "Territory". For the "Mountain Bird" Lars Øyno was awarded the International Ibsen Scholarships.

Lars Øyno’s theatrical ideology is inspired by the visions of Antonin Artaud – a French dramaturge, actor and director. Antonin Artaud believed that theatre should be a force for the liberation of the human subconscious and revelation of man to himself. “The Theatre of Cruelty” has been created in order to restore to the theatre a passionate and convulsive conception of life, and it is in this sense of violent rigour and extreme condensation of scenic elements that the cruelty on which it is based must be understood.

Grusomhetens Teater is one of the most unique theatres in Europe. Founded in 1992 in Oslo, it toured all over the world and performed on stages on Great Britain, Germany, India, Poland, Russia, Turkey, France, Sweden and Japan.

"We create theater with the body’s own musicality, its breath and poetry, as the beginning for all actions. Artaud wanted to awaken the inherent life force that exists in nature and that the Western man seems to have forgotten. Theatre thus becomes a tool for real life. We do not seek to reproduce realistic reality so it can be recognized, but to tell of the core of life inherent in every genuine experience. Although based on a dramatic work or a literary text, the written word does not have a pivotal role and is often lost in the overall stage picture"

"This successful performance’s force is: The good fingertip feel for the era and environment, and a satirical sting that goes fine hand in hand with genuine cheerfulness"