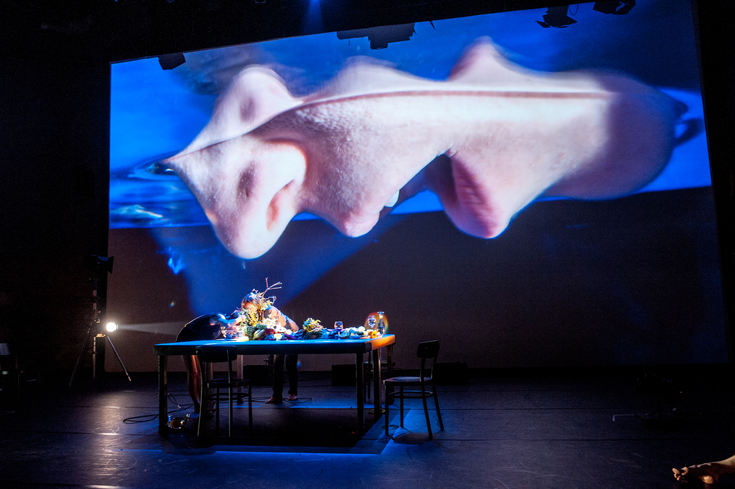 Liquid Loft is supported by the Cultural Section of the City of Vienna, (Kulturabteilung der Stadt Wien) and the Austrian Federal Chancellery for Arts and Culture (Bundeskanzleramt Österreich, Kunst & Kultur)

“Deep Dish” shows how a dinner party may turn into an adventurous ride through the dimensions of macro- and microcosms. The live-images of a handheld camera, directed by the performers dancing on stage, lead through bizarre parallel worlds of organic objects.

Methods of film-making, along with acoustic contortions, evoke metaphors of baroque gardens, earthly delights and their inevitable collapse. A society driven by longing and curiosity, flamboyantly but also callously celebrates its own transience in the manifold dimensions of reality, blown up on a big screen. In this still-life, all movement and human behavior is inexorably absorbed by the opulence of nature.

Chris Haring is a famous Austrian choreographer, recipient of lots of awards, among them – “Outstanding Artists Award” for performing arts from the Austrian Federal Ministry of Arts (BMUKK). One of his main influences for his performances is science fiction and the human body as a cybernetic landscape. Chris Haring collaborated with different dancers and choreographers all over the world, he staged performances in Great Britain, Germany, China, France and Russia.

“All in all, this is one of the best dance pieces to be seen in Austria this year”
DerStandard

“Deep Dish” is a baroque installation - in opulent beauty, commemorating the perishable nature of existence”
tanz.at

Liquid Loft is supported by the Cultural Section of the City of Vienna, (Kulturabteilung der Stadt Wien) and the Austrian Federal Chancellery for Arts and Culture (Bundeskanzleramt Österreich, Kunst & Kultur)