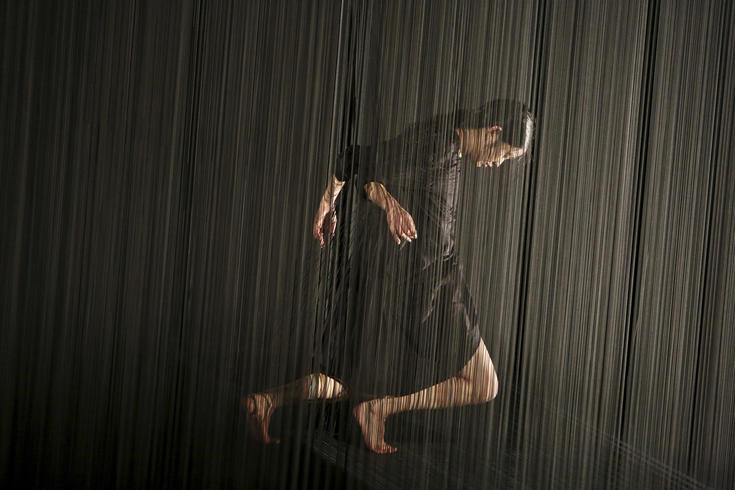 "Plexus" is a fabulous example of  "physical theatre", a dancing portrait of Japanese ballerina Kaori Ito, created by a French choreographer Aurélien Bory. The word plexus comes from Latin and means "intertwining". Later on, the ordinary sense of the term used in the context of anatomy meant "the network of nerves or blood vessels". The very definition of the word refers to the muscles’ inner mechanics: the impulses from the nervous system and the flow of oxygenated blood, as well as the external mechanics of dance: intertwinings of movements, driftings, bodies and body parts.

"The way I intended to portray Kaori Ito mostly implied portraying her body, – says Aurélien Bory. –  I’m not interested in an anatomical study, but in the memory of a body substantially shaped by dance; I care about the innermost marks her art has carved in her living body. How has her every cell taken part in this wonderful network of muscle tissue? How has dance shaped, sculpted, and eventually expanded or crippled her inner space? Plexus deals with a dialogue between Kaori’s inner world and the outside world. Isn’t this dialogue one of the quintessential features of the universal human experience? Is this also the hub of our frailties?"

Aurélien Bory is a French choreographer and director, founder of the Compagnia 111. He develops a "physical theatre" singular and hybrid, a crossbreeding between different, converging fields in the performing arts – theatre, circus, dance, the visual arts, and music. His interest for sciences influences his esthetic. Aurélien Bory’s works are driven by the question of space and leans on the scenography.

His shows toured all around the world, Russian audience saw one of its productions in 2012. Aurélien Bory is the recipient of the Créateur sans frontières trophy (France), FAD Sebastià Gasch Awards (Spain), nominee for the "Best new dance production" to the Olivier Awards (Great Britain).

Kaori Ito is a famous Japanese ballet dancer and choreographer, the recipient of lots of trophies and awards. She collaborated with such choreographers as Philippe Decoufle, Angelin Preljocaj, James Thiérrée, Aurélien Bory and others.

"A jewel of optical theatre, at the crossroads of magic, dance, puppetry and cinema"