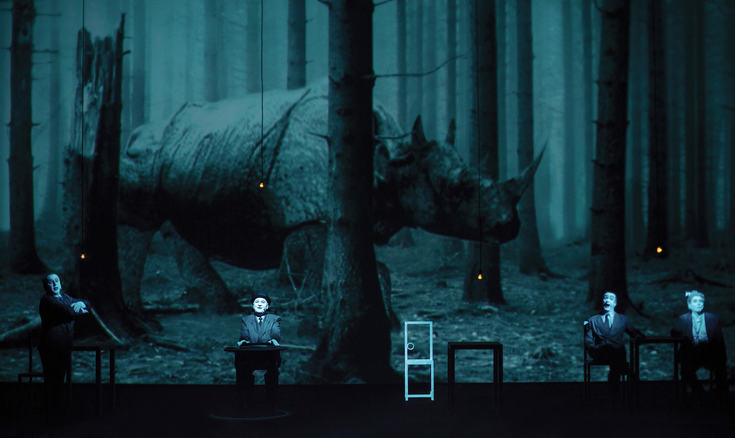 Robert Wilson’s productions do not cease to amaze and induce the audience to reconsider their view of the theatre. Every scene, every "rame" of his plays is choreographed to perfection: accurate colour balance, delicate touches, beautiful costumes and grotesque make-up design.

"Rhinoceros", a play by one of the founders of the Theatre of the Absurd Eugene Ionesco, was produced in the playwright’s home country Romania. Ionesco and  Wilson were acquainted: they met in Paris, where the famous absurdist offered the American director to stage one of his plays.  It took Robert Wilson almost 45 years to put his mind to the idea and, eventually, he chose one of the playwright’s most complicated works.

Robert Wilson is a cult figure in the theatre, one of the world’s foremost vanguard theater artists of the XX-XXI century. He creates on stage his mathematically precise universe at the junction of the drama theatre and contemporary art, dance, MIME and shadow theater.

"Deafman Glance", produced in 1971 in Paris and enthusiastically received at Festival d'Avignon, brought Robert Wilson world-wide acclaim. In 1976, in collaboration with a composer Philip Glass, he created the famous opera "Einstein on the Beach", after which he started working more and more often in Europe.

In the past years, the director has been collaborating with Berliner Ensemble theatre, where he has created a number of productions including the famous "Shakespeare’s Sonnets". Recently, the Theatre of Nations in Moscow saw his "Pushkin’s Fairy Tales" performance, which became a sensation of the Russian theatre season.

Robert Wilson is a holder of numerous awards in theatre and arts, an honorary member of several universities in the USA, Commander of the Order of Arts and Letters (France).

The National Theatre of Craiova is one of the most renowned theatres of Romania taking a regular part in international festivals like Festival d'Avignon, Edinburgh Festival,  Wiener Festwochen  and others. The theatre was founded in 1850.  Its stage has seen the productions by such directors as Silviu Purcarete, Peter Brook, Eimuntas Nekrosius, Robert Wilson and Lev Dodin.

The National Theatre of Criova – a  member of the European Theatrical Convention (CTE) since 1995 — has become the first theatre from a Central and East European country entering this international association's guild.  The famous British magazine "The Stage" compared the National Theatre of Craiova with Brecht’s Berliner Ensemble and Peter Brook’s Royal Shakespeare Company. It is the only theatre in Romania to be awarded the "Cultural Merit" Order in the rank of Commander.

"It has been said that Wilson’s theatre is that of "mobile sculptures", that the actor is especially shape in the refined geometry of the director – one with its own rhetoric, an  alternation of space and non-space, full and empty, which the light-infused décor  illustrates. Architect Wilson’s show from Craiova, a suite of vivant paintings, stuns  through the beauty of shapes"

"The performance contains all the ingredients that the Wilson brand has us accustomed to: impressive glowing backgrounds, rapid changes of color; spectacular videos, expressive and extravagant costumes, interesting decor elements. Yet if all these were to be expected, it was the intellectual approach of the play that surprised us, and very pleasantly too"

"Robert Wilson’s new staging at the National Theatre of Craiova is a triumph... Wilson is a painter, an architect and an artist for the visual stage"