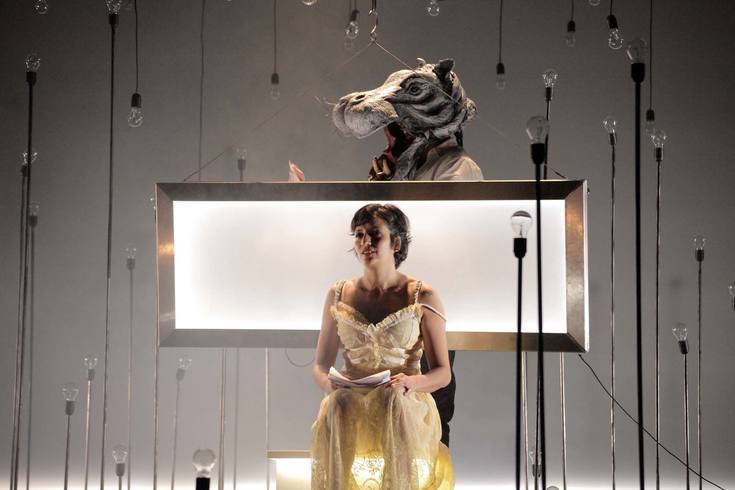 "Bianco su Bianco" is a moving theatrical clowning production performed by actors with circus background. The plot follows two characters – an actress and a stage technician – and carries the audience into a surreal universe and the world of memories. The performance epitomizes Finzi Pasca’s theatrical vision – delicate and light, abounding in twists, turns and nuances; his inimitable style combining drama, buffoonery, circus and acrobatics. Danielle himself calls this technique "theatre of the caress".

Daniele Finzi Pasca is a renowned Swiss director, clown, choreographer and actor. The holder of Hans Reinhart Ring, the highest distinction of Swiss theatre, the Swiss Award in the Show Business category, the American Drama Desk Award and many other accolades.

He has created and directed productions for Cirque du Soleil, the closing ceremony of the Torino 2006 and Sochi 2014 Winter Olympic Games as well as the opening ceremony of the Sochi 2014 Paralympic Games. He directed the operas Aida and Requiem, by Giuseppe Verdi, at the Mariinsky Theatre in St. Petersburg, Russia, and created Donka – A Letter to Chekhov, a production in collaboration with the Chekhov International Theater Festival.

Compagnia Finzi Pasca was founded in 2011 as a result of the union between  Teatro Sunil (Danielle Finzi Pasca’s project) and a production company Inlevitas. The company builds on the aesthetics of the so-called "theatre of the caress" – a theatrical technique based on "the invisible gesture and the state of lightness".

"A very affectionate love story, a breath of poetry blown from the stage onto an enchanted audience"