Street Theatres Parade “Over the City” 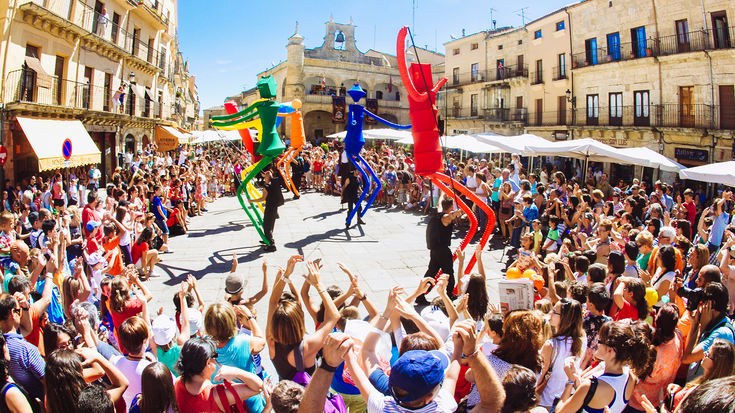 On Russia Day, “Over the City” Street Theatres Parade will walk the main street of Voronezh. There will be both theatres familiar to Voronezh citizens from the previous edition show, and the ones that have never performed in our city before. The artists – actors, stilt-walkers, dancers, musicians, jugglers – wearing amazing costumes, will flood the Revolution Avenue with all kinds of fantastic characters imaginable: from aliens and fairy creatures to flying jellyfish and headless giants.

7 companies are taking part in the parade this year:

DULCE COMPANIA (Germany) is a Berlin based company founded in 2003. The multinational troupe, composed of artists from Brazil, Peru, Chile, Italy, Japan and Germany, has taken part in many festivals all over the world.  In Voronezh Dulce Compania will present 2 shows - an absurd interactive walkact “Headless” and dance performance “Trio Doux Amour”.

EL CARROMATO (Spain) is a street theatre founded in Cadiz in 2000. The company works with marionettes, inflatables and dolls, pyrotechnics. The artists also make use of stilts, fancy make-up, live music and dance in their shows. El Carromato have created about 20 performances, some of which have been shown over 300 times in Spain and in other parts of the world. Voronezh citizens will enjoy their mobile show “Big Dancers” where fives gigant marionettes dance and fill the streets with colors and music guided by the master of ceremonies on stilts.

TALL BROTHERS (Moscow) is a company of theatre and circus actors, a regular participant of street theatre festivals in Russia and abroad. The troupe includes artists of various genres: stilt-walkers, clowns, mimes, conjurers, jugglers, fakirs. Their repertoire ranges from light improvisations to street carnivals, each show is a true feast for the eye appreciated by both children and adults.

AUTHORIAL THEATRE “SKETCHES IN SPACE” (Moscow) specializes in creating shows and performances in the absurd genre, adhering to the following principle: “Art means breaking the laws of reality for the sake of understanding reality”. The art lab looks upon its work as an attempt to artistically interpret life, making every show a pursuit of self-discovery.

TEATR BIURO PODRÓZY (Poland) - one of the most interesting street theatres of Poland formed in 1988 by director Paweł Szkotak. The company has presented its performances in 50 countries all over the world and won prestigious awards. In 2002, in recognition of its work, the theatre was awarded for its contribution to the promotion of Polish culture around the world by the Polish Foreign Minister and for its theatrical achievements by the Ministry of Culture. Paweł Szkotak won the prestigious Paszport Polityki award in 2005. Last year TBP participated in the Street Theatre Parade of Platonov Arts Festival and presented "Planet LEM" performance.

Start - next to Andrey Platonov’s monument