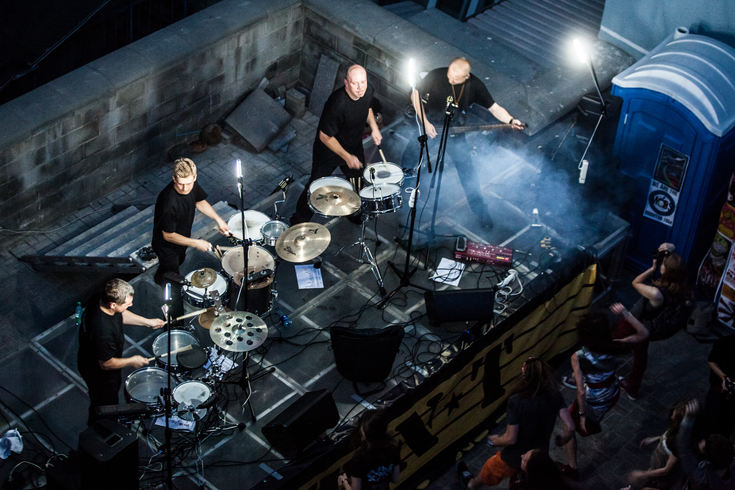 Drum Ecstasy is a unique musical project, an unprecedented power of sound defined by the band's compositions and instruments. Four musicians playing steel-shelled drums create a sound that explodes the audience right from the very first beats. The band is a frequent guest on various shows and at presentations. Apart from drums musicians also use electric saws, drills, carbon-dioxide fire extinguishers, barrels, car brake-discs, and other industrial junk. Drum Ecstasy has taken part in many international festivals, such as SKIF 2000-2002 (Russia), Shine Festival (Holland), Industrial Music Festival (Germany), be2gether (Lithuania), Kryl'ya 2005 (Russia), etc. They have also played support for concerts by Robert Plant, Dub FX and The Prodigy. The band's music was used in quite a number of movies and commercials.

In the White Well quarry Drum Ecstasy will present the program with Dmitriy Lukyanchik (ex-vocalist/drummer of the acclaimed Belorussian folk band Troitsa and leader of Altanka). The music is based on authentic Belarusian folk songs accompanied by drums and bass guitar imitating the sounds of folk instruments (lyre, bagpipes).

“Drum Ecstasy - a vibrant industrial rave, blowing one’s mind and dragging off on the dance floor even the laziest partygoers”